Shock and disbelief have erupted online after the wrong Miss Universe winner was crowned.

Miss Colombia Ariadna Gutierrez was announced winner of the 2015 beauty pageant before organisers revealed she was actually the first runner-up.

“Talk about awkward,” described one Twitter user who “couldn’t help” but find the gaffe “hilarious”.

Another user, Mark Critch from Canada, said: “And the winner is – Miss Information.” 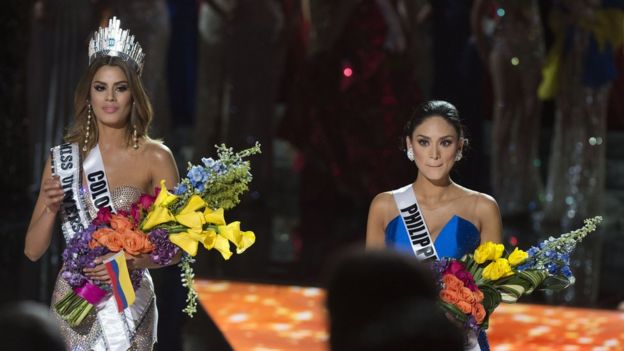 It was shared more than 62,000 times and received more than 17,000 comments from viewers across the world.

“That was poorly handled. Both of these gorgeous ladies deserve an apology because that was embarrassing for both of them. I literally felt both of their pain,” read a top comment by Lemmy Cliff.

“That was the most annoying Miss Universe contest ever,” said another commenter Andres Felipe Arbelaez. “The host was horrible and Miss Colombia should have won.”

Pageant fans from the Philippines also began to express anger at the incident.

“Our Miss Philippines didn’t get her shining moment,” said a fan on Facebook. “It feels like she and our country were robbed of the winning moment, shame!”

‘Everything happens for a reason’

Ms Wurtzbach has since told reporters that she wishes Ms Gutierrez well following the incident.

“I’m very sorry, I did not take the crown away from her and I wish her well in whatever she wants to pursue after this pageant,” she said.

Ms Gutierrez also addressed fans in a backstage video that has been shared on the pageant’s official page.

She said: “Everything happens for a reason so I’m happy for all that I did.”

At the end of the night, Ms Gutierrez was named first runner-up followed by Olivia Jordan from the United States.

Host Steve Harvey responded, saying it was “his mistake” and he would take responsibility for not reading the winning card correctly.

“I’d like to apologize wholeheartedly to Miss Colombia & Miss Philippines for my huge mistake. I feel terrible,” he said in a tweet that was re-tweeted more than 51,000 times.

“I don’t want to take away from this amazing night and pageant. As well as the wonderful contestants – they were all amazing.”

While some Twitter users remained upset over the mistake, others began to tweet out messages of support.

“To err is human… to forgive is divine,” said another user in reply to Mr Harvey’s apology.

In an incident apparently unconnected to the competition, at least one person was killed and dozens injured after a car ploughed into a crowd next to the Miss Universe venue.