US Election 2016: Cruz and Rubio attack Trump in debate

Republican presidential hopefuls Ted Cruz and Marco Rubio have unleashed a barrage of attacks on front-runner Donald Trump in the last debate before next week’s pivotal primaries.

The senators sought to blunt Mr Trump’s momentum after he won three of the first four contests.

Immigration, healthcare and outreach to Latino voters dominated the debate.

But like previous occasions, the debate quickly disintegrated into long periods of shouting and personal insults. 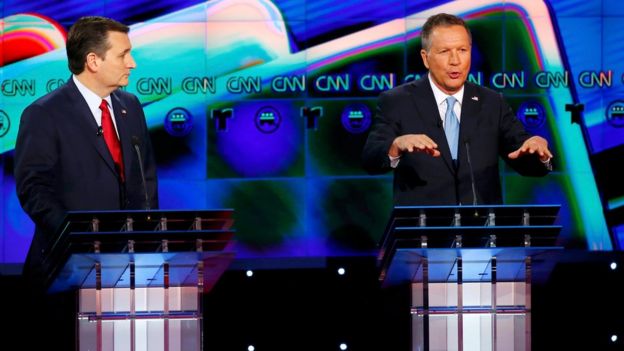 John Kasich (right) stressed his experience as governor of Ohio

At long last the Republican candidates have come to the realisation that Donald Trump can actually win this race, but it may be too late.

For more than two hours, Senators Marco Rubio and Ted Cruz took turns throwing haymakers at the New Yorker. They attacked him on his business record; they mentioned hypocrisy; they questioned his conservative credentials; and they criticised the lack of detail in his policies and his reliance on bluster.

“We’re having a lot of fun up here, aren’t we?” the front-runner quipped at one point. But the truth is that Mr Trump was on his heels for much of the evening.

The challenge for the men who would unseat the leader, however, is that the best time to bludgeon a candidate is before it’s clear circumstances are forcing you to act. In a campaign where authenticity is worshipped above all, Thursday’s fireworks could smack of the kind of political expediency many associate with traditional politicians.

Both Mr Cruz and Mr Rubio drew blood with their attacks, but Mr Trump will be likely to emerge unbowed.

Mr Rubio, who has come second in many of the recent contests, mounted a series of attacks on Mr Trump.

“If he hadn’t inherited $200m, you know where Donald Trump would be? Selling watches in Manhattan,” Mr Rubio said in one tense exchange.

Mr Trump shot back: “I hired tens of thousands of people. You’ve hired nobody.”

The billionaire real estate mogul found himself increasingly on the defensive about his business dealings, his conservative credentials and his support for Israel.

Mr Trump has been extremely popular despite his controversial comments about deporting millions of undocumented workers and banning Muslims from travelling to the US.

Next Tuesday, known as Super Tuesday, millions of voters in 11 states will cast ballots.

A quarter of the total numbers of delegates needed to secure the Republican nomination will be up for grabs.

Mr Trump is currently leading in 10 out of 11 states holding contests on Super Tuesday.

On the Democratic side, Hillary Clinton and Bernie Sanders will compete for 1,004 delegates on Super Tuesday. So far, Mrs Clinton has 505 delegates and Mr Sanders has 71.

Each party formally announces its presidential candidate at conventions in July, four months before the presidential election.