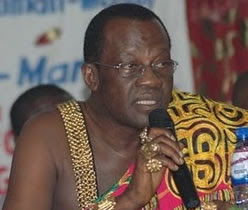 Two Ghanaians have been elected by consensus at the United Nations General Assembly in New York to serve on two expert bodies that will assist the world body in carrying out its oversight responsibilities.

They both begin work from January 1, next year.

The Independent Audit Advisory Committee is an expert advisory body that assists the Assembly in fulfilling its oversight responsibilities. The Committee also advises the General Assembly on the scope, results and effectiveness of audit as well as other oversight functions.

In addition, the IAAC advises the Assembly on measures to ensure the compliance of management with audit and other oversight recommendations.These include examining the work plan of the Office of Internal Oversight Services, taking into account the work plans of the other oversight bodies with the Under-Secretary-General for Internal Oversight Services and to advise the Assembly thereon.

The 15- member Commission on which Daasebre Oti-Boateng will serve, is an independent expert body established by the UN to regulate and coordinate the conditions of service of staff in the United Nations common system, while promoting and maintaining high standards in the international civil service.

The Commission’s members who serve in their personal capacity,are appointed by the General Assembly for four-year terms, with due regard for broad geographical representation. The Chairman and the Vice-Chairman are full-time members and are based in New York, whilst the full Commission meets twice a year.

The ICSC is assisted by an expert subsidiary body, the Advisory Committee on Post Adjustment Questions (ACPAQ), which provides technical advice on the methodology of the post adjustment system. Other working groups and panels are established on an ad hoc basis as the need arises.

The latest elections come on the heels of Ghana’s overwhelming election last month to the strategiic United Nations Commision on Human Rights and the Economic and Social Council (ECOSOC),that serves as the central mechanism for the activities of the United Nations system and its specialized agencies.