At least 18 Turkish construction workers have been kidnapped by gunmen in the Iraqi capital, Baghdad, Iraqi and Turkish officials say.

The workers were employed by a Turkish company building a sports stadium in the north-eastern Sadr City district.

They were sleeping in caravans at the site when armed men wearing military uniforms reportedly arrived in vehicles at dawn and took them away.

Iraqi officials said they did not know who was behind the kidnapping.

The BBC’s Mark Lowen in Istanbul says Sadr City has seen a spate of abductions, some blamed on Shia militias which control the area and others on gangs.

The company building the stadium in Sadr City, Nurol Holding, told the BBC that the gunmen stormed the site at about 03:00 (00:00 GMT) on Wednesday.

Police sources said they wore military uniforms and drove black SUVs. After disarming the guards, the gunmen broke down the doors of the workers’ caravans and took them away, the sources added.

Nurol Holding said no prior threat had been issued.

“The Iraqi authorities for the time being do not have information on how the incident occurred or who captured them,” he was quoted by AP as saying.

Mr Kurtulmus also said no contact had been established with a Turkish soldier who went missing late on Tuesday during clashes with gunmen in territory controlled by the jihadist group Islamic State (IS) in northern Syria that left another soldier dead.

In August, IS accused Turkish President Recep Tayyip Erdogan of “selling the country to crusaders” after he ordered air strikes on the group’s positions in Syria and allowed US-led coalition warplanes to use Turkish airbases for bombing raids. 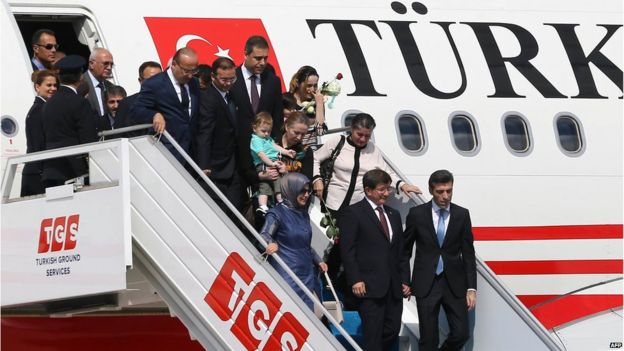 Last year, 46 Turkish citizens were seized by IS militants as they captured the northern Iraqi city of Mosul.

They were released three months later, but the episode highlighted the continuing security threat to the large community of Turkish nationals working in Iraq, our correspondent adds.