A Ghanaian smock is a plaid shirt that is similar to the dashiki, worn by men in Ghana. There are also female versions of it.

The smock is also called a fugu or a batakari in the northern region,dansika in Frafra,futik in Kusaal both in the upper east region.

It is worn by kings in the three northern regions but is now popular across Ghana and even southern Burkina Faso.

The smock originated in the northern region of Ghana, see external links for photos.

The smock and Kente cloth are the national dress of Ghana.

Kente cloth originated in the southern region of Ghana.

The smock is made of hand-loomed strips popularly called Strip Cloths.

They are made of a mixture of dyed and undyed cotton loom, and are originally from the northern part of Ghana and other parts of West Africa.

The strips are sewn together by hand or machine giving the smock a plaid appearance. Most smocks have embroidery on the neckline. The smock is worn with a kufi cap. However, chiefs in Ghana wear the smock with a red fez hat.

The smock in the West

Historically, the smock was rarely seen in the West. As recently as the 1990s, immigrants from Ghana were the only individuals seen wearing the smock.

All of that changed as the popularity of films produced in Ghana increased among Black Americans and Caribbeans.

From the dawn of civilisation, man has had an intense relationship with nature, and cotton is a basic natural product that man uses for various purposes.

Cotton is known for its versatility, use and natural comfort. It is used to make all kinds of clothes and all kinds of materials for domestic use, as well as industrial purposes.

Cotton fibre is woven or knitted into fabrics such as the “fugu” and “Kente.”

Tamale, Bolgatanga, Wa,  Daboya, Yendi and its environs have a particularly strong tradition of weaving fugu.

Generations of artisans have been engaged in this profession. This has become hereditary with fathers transferring their knowledge and skills to their sons.

The boys in the family, at a very young age, start learning the art of making fugu with very simple wooden looms and improve their skills through constant practice.

Craftsmen in northern Ghana are famous for their magnificent workmanship. The fugu often has embroidery designs on them to enhance their beauty.

This is particularly true in the case of Daboya, the northernmost town of Ghana, which is known for its beauty.  The area, with its natural beauty and inexhaustible salt production ventures, rivers and tourist attractions, inspires artists and craftsmen.

The best known fugu is Daboya (meaning, “our brother is better than us”). Daboya fugus are famous for their beauty, patterns, colours, motifs, artistic appearance and texture.

The Ghanaian smock has a rich history, according to Mr Sani Dramani Iddrissu, the Headmaster of Karushegu Municipal Authority JSS and a trader in fugu.

He said the fugu was first introduced into Ghana by the Moshies who migrated from Burkina Faso and settled in the northern part of the country and the Hausas from northern Nigeria.

Women in the North later used the local cotton to make treads, which were woven as fugu for both men and women. Fugu means cloth in Moshie language). The Dagombas call it Bingba, while people from the south prefer to call it Batakari.

The fabric, made with cotton, is processed into threads by women. The threads are then stretched, dyed in different colours, dried on a line for a period of time and woven into strips and stoles with hand looms.

The strips which are four inches wide are sewn together either by hand or machine.  The fugu usually has embroidery patterns on the neck, with V or U shapes cut above the chest.

The fugu, has retained its rich traditional heritage and fulfilled customers’ demands and contemporary trends.

According to Mr Seidu Umar, who sells smocks at the Arts Centre in Accra, the social and cultural appeal of the fugu are not the only things that have attracted him into the trade, but the patronage and ready markets in Accra, for his business have also been key factors.

For Mr Yahaya Imren, a 25-year-old fugu weaver from Tamale, “lack of support from the government to promote the local weaving industry has not allowed the trade to grow. Most of us have no formal training but we learned the trade hands on,” he said.

At the early stage of its appearance, the dress was used for political and military, rather than economic purposes. During the Damba Festival, for example, the dress code is the fugu.  The smock is also worn during marriage and burial ceremonies.

It is a fact that in Ghana, most politicians wear fugu sewn in their party colours to rallies. The modern fugu has distinctive styles. These include Yenkisi, a sleeveless smock usually used by males, including chiefs. This is worn over long and short sleeved T-shirts.

The second type of smock is the Banaga, which has short sleeves, usually above the elbow and is associated with success and well-being.

The Jampa is the third smock type. The sleeves extend to the wrist. This smock indicates that one belongs to a high status or is a minor chief.

Another important smock type is the Kpakoto. This comprises the fugu, a pair of trousers and a cap (the three-in-one).  It has long and very wide sleeves and is usually worn by paramount chiefs during important events.

The more elaborate style is known as the Kuntundi, which has long full and very wide sleeves. It is normally worn only by paramount chiefs during important events. 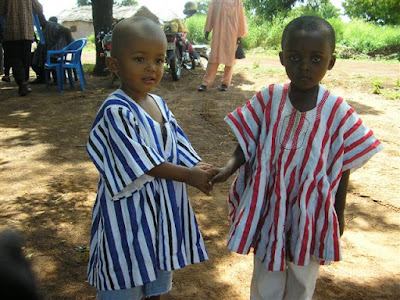 The Ghanaian fugu has a powerful symbolic meaning recognised internationally, especially among Africans in the Diaspora.

Dealers provide the cloth and design; however, the craftsmen have the liberty of choosing the threads and colour combination. Before commencing work, the selected design is traced on the fabric by a professional tracer.

Though motifs are picked from nature, new designs have continuously been added depending upon fashion and consumers’ preference.

The heart and star is a motif that has been abundantly used. Animal and human figures are not common, but some old fugu depicting hunting scenes are sometimes seen at ceremonies.

Later, the ‘adinkra’ motif emerged as an embroidery pattern.

Usually the embroidery is seen on the undyed material with white or cream background. However, according to the demand of consumers, fabrics are dyed in different colours.

The incomparable embroidery styles add to the beauty not only of the Daboya, but also the Dagarkparlo of the Upper West Region and fugus from Bolga.

The Kuntundi dress is worn as an outer garment simultaneously with several smocks with their sleeves folded on top of the shoulder.
Significance

Wearing of the fugu portrays the northern culture and an indication that one is from a royal family.

The fugu gained prominence when the first President of Ghana, Osagyefo Dr Kwame Nkrumah and other leading members of his party wore it when they were declaring the country’s independence on March 6, 1957.

Former Presidents Rawlings and John Evans Atta Mills used it extensively as their ceremonial gowns, making the fugu to be acknowledged as national attire.

The fugu also has great historical and linguistic significance. For example, when the cap is worn upright, it means no chief has a higher status than the one wearing it.

Traditionally, the fugu is seen as a war dress, so it is understood that the protective amulets adorning it create a solemn and mystical effect during war.

For a long time, the fugu has been used overwhelmingly in rituals such as the installation of chiefs and as regalia during the time of war to bolster the royal power of the warriors. The Gonjas and Dagombas usually dress in fugu during their yam and fire festivals.