The Boko Haram Carnage in Nigeria: No solution in Sight

Folks, the carnage being wreaked on Nigeria by the dreaded Boko Haram terrorists is now beyond belief. Forget about control. I am deeply worried at the high incidence of devastation of limb and property while the Nigerian government falters in its attempt to contain the situation. All indications are clear that the problem cannot be solved anytime soon. We expect more of the carnage to wreck life in Nigeria, especially, and other parts of the West African sub-region that will be unfortunate to be visited by the terrorists. 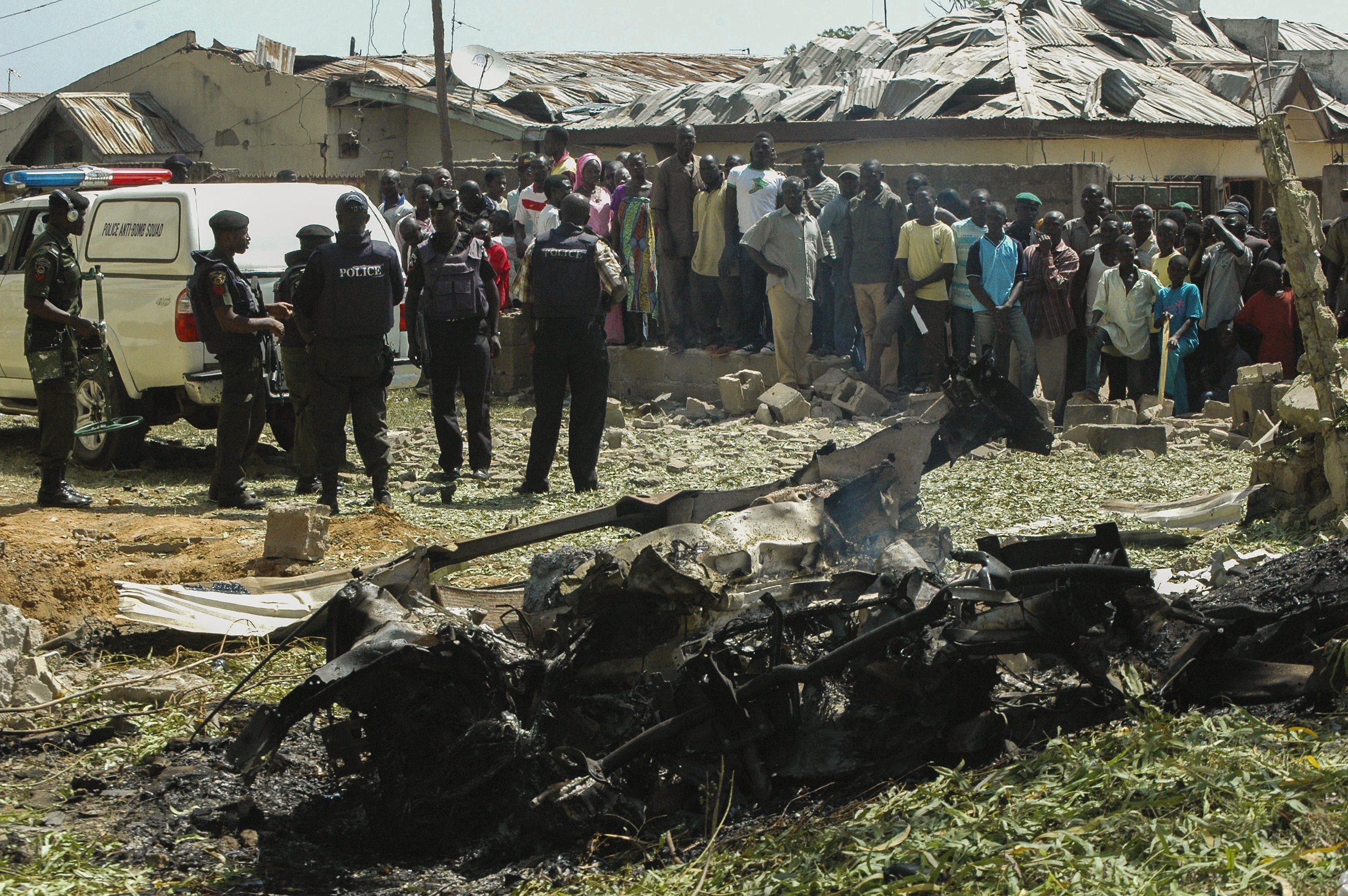 As the carnage persists, one wonders what has become of all the hot air blown by Nigeria’s Goodluck Jonathan and the ECOWAS, not to bring in the international community (the United States, Britain, and France).

The Nigerian authorities have clearly faltered in many ways to give Boko Haram the edge. Lack of commitment, inability to provide adequate logistic support to the military to confront the well-armed and well-resourced Boko Haram, betrayal from within the Nigerian Establishment itself, and many other factors are responsible for the persistence of the Boko Haram scourge.

The Nigerian government isn’t being honest in its handling of the situation. After being exposed as a weakling, it sought to deflect attention from its inadequacies by telling the world that it had reached an agreement with Boko Haram for a ceasefire. The group pointedly rubbished that claim and has since stepped up its devastation. The 200 girls abducted from Chibok are still in the “wilderness” and public agitations for the government to bring them back home have fizzled out, lacking any official endorsement and action. The impunity with which Boko Haram is acting suggests that the group indeed has a stronghold in the parts of the country, where it is well grounded to perpetrate its dastardly acts. And it does so in broad daylight, daring the Nigerian Establishment; but the Establishment cannot confront Boko Haram because it just cannot do so!!

Meantime, the loud noise made by ECOWAS to assist Nigeria solve the problem has died down, achieving nothing consequential to give Nigerians any breather. Neither has anything beneficial emerged from the talks that France’s Hollande held with the Presidents of Nigeria, Cameroon, and Chad sometime this year. I recall very well the boasts from Hollande and his promise to use every means possible to support efforts at clamping down on Boko Haram. Everything about that meeting has ended in smoke, giving Boko Haram the impetus to launch indiscriminate attacks anywhere it chooses to prove that it cannot be intimidated by people who know little about how it operates.

I am more than perturbed at the turn of events, especially at the lukewarm attitude of the Nigerian government, the ECOWAS, and the emaciated African Union. This is an African problem to be solved decisively by Africans even before the international community lends any helping hand. Unfortunately, all the African leaders, especially those in West Africa, are paralyzed by inaction. They seem even not to know how to solve their own countries internal problems let alone how to extend hands to help Nigeria deal with Boko Haram. All they are good at doing is making ugly noise and promises that annoy more than salve.

If the international community can rush to tackle the devastating activities of terrorist formations like al-Qaeda, al-Shabbab, Islamic State, and any other, why aren’t they doing same to Boko Haram? Is it because they cannot help solve the problem or because they don’t consider it as worth their bother? Why should it be so? All because our leaders are effeminate and not worth taking on board? Our woes will definitely deepen with such characters in power who are more interested in propping up the weak institutions of state to help them reap the benefits of the waywardness called “democracy” in our part of the world. The international community is laughing us to scorn!!

On another note, the US and Britain sent technical support to Nigeria for surveillance and other purposes but nothing practical has been accomplished, which leaves many of us wondering why it is increasingly difficult for anybody to break the back of Boko Haram. In truth, only the Nigerian Establishment can lead the efforts to cripple that locally brewed terrorist group. Doing so calls for a high degree of commitment, truth, honesty, and a mixture of vigour, violence, and determination. Does the Nigerian government have all these qualities to lead the fight against Boko Haram? I don’t think so.

That is why it is easy for President Jonathan to use his mouth instead of the vast powers granted him by the Nigerian Constitution to solve the problem. He has just been reported as condemning the carnage that occurred at a mosque in Kano. (See http://www.bbc.com/news/world-africa-30256157). Mere condemnations won’t “touch” Boko Haram. Only decisive action will. But who is to take this action? The Boko Haram scourge has terrible implications and must be tackled expeditiously. Otherwise, woebetide Nigeria. And woebetide other countries likely to be targeted by Boko Haram or any new terrorist group that spreads its tentacles beyond the confines of Nigeria.

Are we really serious in our part of the world? Even if we assume that our governments cannot solve problems to improve living standards, should we be satisfied that their inefficiency has created a congenial atmosphere for home-grown terrorists to do acts that worsen the plight of the poor, law-abiding citizens? What, then, is the value of those governments? And does the democracy being practised, which is based on a weird “social contract” (solidified by the quadrennial ritual of voting), really matter? Under military rule, no terrorist group could emerge to do things as this Boko Haram is doing. Why is it so easy for such a group to operate in a democracy? And which country goes next to the “chopping block”?

Folks, there is more danger ahead, especially as the various governments fail to solve pertinent problems and pit themselves against the citizens. When push comes to shove, the embittered and disaffected citizens will fall for anybody needing them to exact a kind of vengeance on the “system”. That is where the real danger lies for us. Boko Haram is just a microcosm of the macrocosm of terrorism waiting to ignite in our part of the world, especially as rival political interests choose to use “brawn” instead of “brains” to seek political victory. Too bad for us.

If you ask me what my solution to the crisis is, I will simply tell you that the Nigerian government should re-examine itself and assess the situation so it can prioritize the fight against Boko Haram to snuff it out.

The fact that some citizens in areas threatened by Boko Haram have already decided to form “Vigilante Groups” to take the fight to Boko Haram, there is much to suggest that a consistent and concerted official action—using all the resources of the state—can crush Boko Haram. All the government has to do is to streamline its operational strategies/stratagems to take the fight to the terrorists. The government needs to be proactive and not reactive, as it has been all these years.

A serious government should by now have had impenetrable networks of informants to help it gather relevant intelligence on Boko Haram and to launch decisive affronts on it head-on. What is happening is ridiculously amateurish, which undermines the integrity of Nigeria (as the so-called “superpower” of West Africa in terms of military strength and accoutrements). What is preventing the Jonathan Goodluck administration from mobilizing all resources and concentrating on Boko Haram as a prime enemy of the state to crush?

The truth is that the government itself is more pre-occupied with redeeming its lost glory than solving pertinent problems to endear it to the hearts of the citizens. There is too much happening to erode confidence in it; and Jonathan Goodluck may be more invested in seeking another term in office, even when the writing on the wall is clear that he will be an undesirable at that time of general elections.

The Nigerian story is a long, winding tale of frustration at this point. As the government wobbles and hobbles, Boko Haram laughs all the way to its next target to attack with brazen impunity. Shame on Jonathan Goodluck and his team!! And more shame on Heads of State in the ECOWAS who glibly promised unbending assistance but have so far not done anything concrete to solve the problem. Their treachery, our woes! No more!!