The Administrative Hierarchy of the Asante Kingdom

As the Asante Kingdom grew powerful, it started with the unity plan , the objective of the founding fathers of the union . The unity idea was crowned with the descent of the Golden Stool which all of them vowed to protect and defend it .

The Asantehene is assisted by the Amanhene (Paramount Chiefs) i.e . the heads of the component states of the Asante Kingdom.

Each of the Amanhene is autonomous and is the ruler of his state . Each Omanhene(paramount chief ) also assisted by subordinate chiefs and elders . The Asantehene does not interfere in the daily administration of the states .

He only comes in when there is a gross mismanagement of a state by the Omanhene and when the case is reported to him by the King – makers of the state for redress . In many cases, the Asantehene appoints a panel to probe , and if settlement is not reached and the paramount chief is destooled , the Asantehene only appoints one of the elders of the state to take charge until a new chief is enstooled.

The post of the Omanhene is the second in the hierarchy after the Asantehene . The third in the hierarchy is the post of Obrempon. It must be noted that an Omanhene or paramount chief is the head of a state , whereas an Obrempon could be the chief in charge of a number of towns scattered in the Kingdom ,e.g . Anantahene or Gyamasehene who heads a number of towns at one area in the Mampong state .

The Obrempon could also be a chief of a single town with historical importance . Such is the case of Abrakaso in the Edweso state or Bipoa in the Agona state. The next in the hierarchy is the post of Odikro or the chief of a town . Odikro is the ruler of a single town or village . He ranks fourth in the hierarchy . Every Odikro is helped to administer his town by his elders , known as Mpanimfo of the town . The elders are selected from individual families of the town.

The post of an elder is the fifth in the administrative hierarchy . The elders are followed by the headmen of the clans in the town . The headmen of a clan is called Abusuapanin. The Abusuapanin( Head of the family ) is followed by house elder or Efiepanin. Each house elder rules over his household . One important thing to note is that each of the posts mentioned has its female counterpart . They are the Ohemmaa or Obaapanin, who rules with the King, chief or elder .

The administrative set up in the Asante Kingdom is the same in all the Akan states . The only difference is that the other Akan states start the hierarchy from the Omanhehe status downwards whereas that of Asante nation goes a step further to the post of Asantehene ( Asante King ) who has paramount Chiefs under him .

The Asante Kingdom does not confine herself to the Asante Region alone , it controls some states in the Brong Ahafo Region . The Asante Kingdom was in existence before the creation of the administrative regions of Ghana 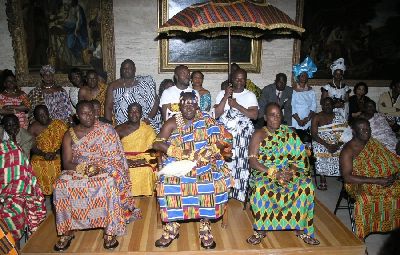 However , after the defeat of the Asante Kingdom in the Akantamansu war ( The Dodowa war ) , many of the conquered states of Asante Kingdom broke away from the Kingdom .

The final blow to the Asante Kingdom was the arrest and deportation of Nana Prempeh I in 1896 and the subsequent independence the British gave each of the Asante states in the Kingdom thereby making them autonomous .

However, the states found out that though they were independent , the Golden Stool belong to so of them . That was why some of the states joined hands with Nana Yaa Asantewaa , the queen – mother of Edweso to fight the British when they saw that the Governor was in to ruin this Asante Kingdom if he is allowed to take the Golden Stool away from the Asante Land .

That unity idea which resulted in their joint action served as the dawn of the second confederacy which materialised on 31st of January 1935 .

( A )   Whereas the Asantehene was the most powerful person in the kingdom , the King in the second confederacy had limited powers . This happened because of that fact that the Asante Kingdom was a colony of the British  and was ruled from the colonial office . The King,s power was shared between him and his overlord.

( B )   The king could only make laws which protected the customs and culture of the kingdom while administrative laws were made by the British government .

( C )   When cases, especially ,land cases were settled at the king,s court and the guilty one was not satisfied with the judgement , he could appeal to the higher courts of the country whereas in the first confederacy the king,s court was supreme.

( D )   The defence of the kingdom became the responsibility of the colonial government ,whereas the power was vested in the king in the first confederacy

( E )   The control of the Asante Kingdom,s economy became the responsibility of the colonial government .

In the first confederacy , when Nana Opoku Ware I saw the commander of the army could seize power, he created the ‘ Ananta ‘ stool and gave the occupant of the stool some men to serve as king,s own battalion to guard him , under his command . ‘ Ananta  ‘ was the sophisticated gun of the time and that was the guns bought for the Anantahene (Ananta chief ) and his subjects to guard the king. He created that stool to check possible coup d ‘eats . It must be noted also that the kins of the first confederacy created stools to commemorate events and moods .e.g.  Nana Osei Kwame created the ” Apagya ” and  ” Atipin ” stools to commemorate moods.

On elevation of stools , Otumfuo Opoku Ware II elevated more chiefs than any of his predecessors . There were fourteen paramount chiefs in the Asante region when he was enstooled as the king of Asante Kingdom in 1970 . 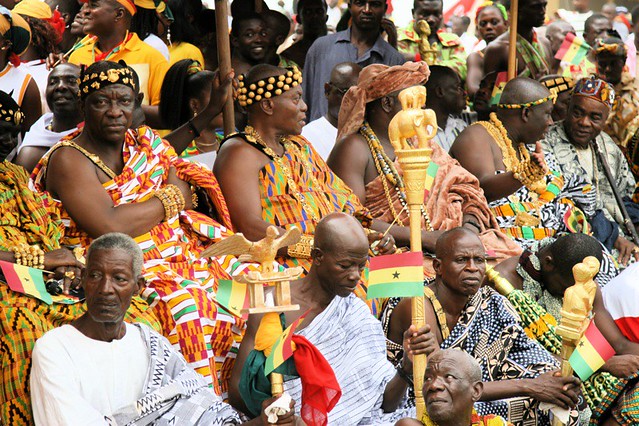 In 1996 , Otumfuo Opoku Ware II , again elevated some more chiefs to paramountcy status to commemorate the silver jubilee of his ascension to the Golden Stool which was celebrated throughout his kingdom in 1995 .

The newly elevated chiefs increased the number of states forming the Asante Kingdom to fifty five  i.e. thirty five in Asante Region and twenty in the Brong Ahafo Region.

The Asantehene who is the occupant of the Golden Stool , therefore is accorded the highest honour and respect . He is the President of the highest authority of the kingdom which is the Asanteman Council.

The Asanteman Council has the following membership:

However , the Asanteman Council met when

( A ) The  Ofumanhene was murdered.

( C )  The Council again met on 26 of April , 1984 to discuss the destoolment of Adansehene by Otumfuo Opoku Ware II.

It is from this house that five members are chosen to represent the Asante Region at the National of Chiefs .

The administration of the Asante Kingdom during peace time was different from war period . During the period of war the kingdom was divided into flanks , i.e

The Asantehene or his representative would be commander in chief . The Paramount Chiefs of the Kingdom would be in charge of the flanks.

At times many of the Paramount Chiefs would be in one flank but one of them as commander of the flank would be their leader . One important fact is that during peace time , the war formation of the Asante Kingdom is adopted when the Chiefs  always met.

Those at the advance guard will also sit opposite the King . And the rest of the flanks also sit the same war formation  with the King. In the states as well as in the individual towns , the sitting formation as practised by the Asantehene and his Paramount chiefs is the same . Each chief has the flanks stated above in his town or village .