The Speaker of Parliament, Professor Aaron Mike Oquaye, will today deliver a public lecture as part of activities marking the 60th anniversary of the formation of the United Gold Coast Convention (UGCC).

The lecture which will focus on the topic “August 4 – Ghana’s Day of Destiny,” will also mark the establishment of the Aborigines Rights Protection Society (ARPS) by John Mensah Sarbah and others.

It comes off at the National Theatre in Accra.

A thanksgiving and memorial service will also be held at Saltpond today where the first nationalist political party, the UGCC was formed.

At a press briefing at the Flagstaff House in Accra last Wednesday, a deputy Chief of Staff, Mr Samuel Abu Jinapor, said the 60th Anniversary Planning Committee had been tasked by President Nana Addo Dankwa Akufo-Addo to ensure that the anniversary was celebrated in an elegant but modest manner.

August 4 has become significant because it plays date to two history defining moments in the story of the Gold Coast / Ghana.

August 4, 1897, is the date on which Ghanaians rose up to resist the obnoxious Land Bill that was promoted by the colonial authority and crafted to annex all “unoccupied lands” in the colony and the protectorate.

Had the bill been successful, the character and outcome of colonial struggle could have changed in a completely different direction from the glorious story that it became.

John Mensa Sarbah led a group of people to resist the bill under the auspices of a political party called the ARPS. This nationalist movement was formed in Saltpond on August 4, 1897.

The ARPS was successful at its objective, and the bill was defeated not just in the Gold Coast, but in the entire West African territories.

This August 4, 1947, is the founding date for the UGCC, the party that first mooted the idea of an independent Ghana and worked actively to achieve proposals for an independent constitution in 1950. That was led by George Alfred Grant and J. B. Danquah.

Both parties maintained their headquarters in the Central regional town of Saltpond. 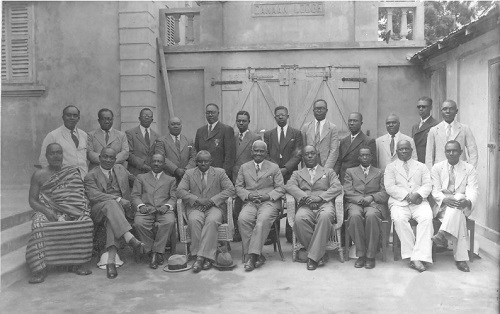 The significance of August 4

Explaining the rationale for the events, Mr Jinapor said the views of many pundits and those in the New Patriotic Party (NPP) were that it was the fight by John Mensah Sarbah and his colleagues that led to the stability of the country and the land tenure system the country had today.

He said exactly on August 4,1947, Paa Grant and his colleagues, the likes of J.B. Danquah and many others, converged on Saltpond to establish the first nationalist political movement of the country, the UGCC.

“It was at this gathering that the ingredients of the Ghana of today, the democratic, free and prosperous country were conceived and out of that, Ghana attained independence,” he added.

Mr Jinapor said President Nana Akufo-Addo had accepted to be the guest of honour at Saltpond and that later on in the day at 6 p.m at the National Theatre, there would be the 60th-anniversary lecture.

“We have deliberated on it as a committee and decided that the Speaker of Parliament, Professor Oquaye delivers the 60th-anniversary lecture on the topic August 4 – Ghana’s Day of Destiny,” Mr Jinapor said.

He explained that the choice of the topic had been deliberate because the date was very significant in the history of the country both on the account of the struggle of John Mensah Sarbah and his colleagues in 1897, and the formation of the UGCC in 1947.

Mr Jinapor said the committee was sure that such a move would generate a lot of discussions in Ghana’s political environment but it came to this conclusion upon very thorough and deliberate thought.

“We can have differences in opinion or different inferences from historical facts. But we must be unanimous on the historical underpinnings of our country.

“It is our contention that the Ghana of today was conceived on that day and that is why we have placed so much significance on the day. It is appropriate to honour that day and ensure that the importance of that day is told to the people,” he added.

Meanwhile, the Daughter of Ghana’s first President, Dr Samia Nkrumah, has stated that she is convinced there is a deliberate attempt to belittle her father’s efforts in winning independence for Ghana.

She said the announcement by the Ghana @60 Anniversary Planning Committee to commemorate August 4 as a significant day in Ghana’s history appears to have opened old ideological wounds.

She added that she was not bothered that the Ghana@60 Planning Committee was planning to celebrate August 4 but must not in any way belittle Nkrumah’s role in Ghana’s independence struggle.

The President, Nana Akufo-Addo and key members of his party, will converge on Saltpond in the Central Region today to commemorate the anniversary of the formation of the United Gold Coast Convention (UGCC), the first-ever political party in Ghana which turned the independent struggle into a political movement.

Political bigwigs at the time, led by J.B. Danquah, described as the doyen of Ghana’s politics on August 4, 1947, announced the formation of the UGCC with the demand for “self-government within the shortest possible time.”

In another development, two journalists, Mr Paul Adom-Otchere and Mr Kwesi Pratt, have crossed swords over the debate about Ghana’s founding history.

While Mr Pratt has insisted that Dr Kwame Nkrumah, Ghan’s first President should be regarded as the founder of Ghana and celebrated on his birth date September 21, Mr Adom-Otchere, on the other hand, believed Ghana’s history was incomplete without due regard given to the likes of the leadership of the UGCC among others.

The two clashed in a debate on an Accra radio station.