UK investigators looking at what caused a Russian airliner to crash in Egypt believe a bomb was put in the hold prior to take-off, the BBC has learned.

The UK government suspended all flights to and from the Egyptian resort of Sharm el-Sheikh two days ago.

The move came after it said the incident was likely to be have been caused by terrorism.

It had received intelligence based on intercepted communications between militants in the Sinai Peninsula.

However, both Egypt and Russia have said it is too early to draw conclusions.

The Metrojet Airbus A321 was flying from Sharm el-Sheikh to St Petersburg when it came down in Sinai on Saturday, killing all 224 people on board. Most of the victims were Russian.

Britons stranded in Sharm el-Sheikh since then are due to begin returning home, but will only be allowed to bring hand luggage.

BBC security correspondent Frank Gardner says that although British officials have not ruled out the possibility of a technical fault bringing the plane down, they think that is increasingly unlikely.

New intelligence was received on Wednesday and the UK government’s Joint Terrorism Analysis Centre has spent the past few days assessing what caused the plane to come down.

Security service investigators suspect someone with access to the aircraft’s baggage compartment inserted an explosive device inside or on top of the luggage just before the plane took off, our correspondent adds.

Sinai-based militants linked to the Islamic State (IS) group said they destroyed the plane, but did not say how. IS has called for a war against both Russia and the US over their air strikes in Syria.

US President Barack Obama told a CBS radio station on Thursday that he thought there was “a possibility” that there was a bomb on the downed jet.

Since Wednesday, several countries have joined Britain in restricting travel to Sharm-el-Sheikh.

France and Belgium are advising their citizens against all but essential travel to the resort, and the Netherlands is warning against travelling via the resort’s airport. 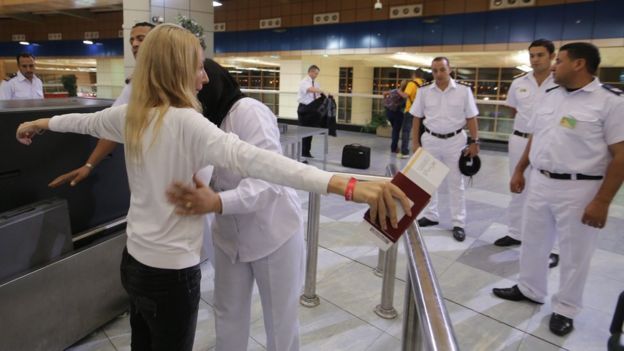 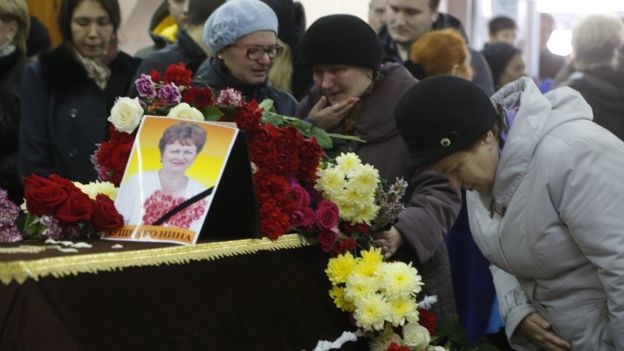 Funerals have been held in Russia for the plane crash victims

German airline Lufthansa says its subsidiaries Edelweiss and Eurowings are halting flights to Sharm el-Sheikh (from Zurich and Duesseldorf respectively) as a “precautionary” measure, and return flights for customers already there will be arranged.

Russian planes are still flying to and from the resort.

“Theories about what happened and the causes of the incident can only be pronounced by the [official] investigation,” Dmitry Peskov, spokesman for President Vladimir Putin, said.

Egypt, which is highly dependent on tourism, said Britain’s decision to suspend flights was unjustified.

Egypt’s President Abdul Fattah al-Sisi, who has been on a visit to the UK, told reporters that security at the airport was tightened 10 months ago at the UK’s request.

However, he said he understood Britain’s concern.

Egypt is leading the investigation into the air disaster, with the help of Russian and other foreign experts.