Baba Yara popularly called King Winger was one of Ghana’s legends in football; a foremost player – voted twice as Ghana’s Footballer of the year as a result of his fantastic goal scoring skill.

Yara started out as a horse jockey player – as a youngster at the Accra Turf Club between 1950 and 1955. Asante Kotoko signed him in 1955, and after a few years, became the greatest footballer of his generation.

He made his debut as a member of the Black Stars in 1955 in a match that saw Ghana put 7 past Nigeria at the Accra Sports Stadium. Baba scored 2 and assisted 4 of the goals. Yara was also a proud member of the 1961 Black Stars and won 51 caps for Black Stars, with 49 goals which is a lot of goals for a winger and was thus nicknamed ‘King of Wingers’.

Yara played active football from 1955-1963, and was voted Footballer of the year twice; the highest football accolade in the country. 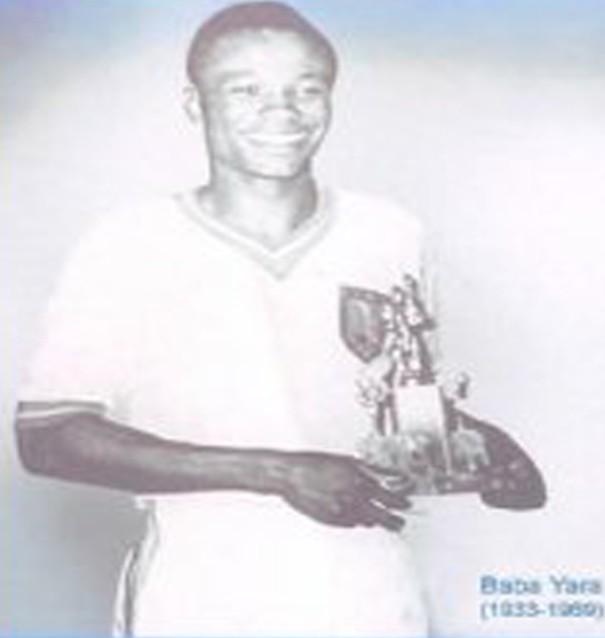 Baba Yara sustained a spinal injury in a motor accident at Kpeve in the Volta region on March 4, 1963; Yara’s teams, Nkrumah’s Real Republikans were returning to Accra after a league match against Volta Heroes at Kpandu when the accident happened. Yara’s career was cut short tragically in his prime at the age of just 26.

He was flown to Stoke Mandeville Hospital in the United Kingdom for treatment for a period of 3 months, but the young soccer hero only returned in a wheel chair.

For 6 years, Baba Yara was bedridden, and eventually died after a very quiet life in a wheelchair. Yara died at the Korle-Bu Teaching Hospital on 5th May, 1969 at a tender age of 33.

Kumasi Sports Stadium was named after Baba Yara on the April 12th of 2005 for his exceptional talent and immense contribution to Ghana football.

Baba Yara was born on the 12th of October, 1936 in Kumasi, Ashanti Region.