The National Sanitation Day which was held last Saturday with the clearing of filth throughout the country saw three notable personalities in the thick of affairs. 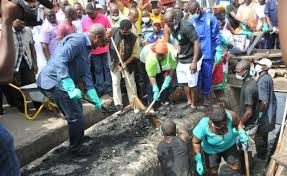 President John Mahama, Vice-President Paa Kwesi Amissah-Arthur, as well as the Asantehene, Otumfuo Osei Tutu II all personally took active part in the activities of the day at various parts of the country.
President Mahama, who was on a visit to the Volta Region to celebrate the Hogbetsotso festival with the Chiefs and people of Anlo seized the opportunity to join the citizenry at Sogakofe to clear filth in some parts of the community.
Vice-President Amissah-Arthur took part in clean-ups in Accra. Cladded in a black Lacoste T-shirt with green gloves to march, he spent hours first at the Kanda Cluster of Schools and the Kanda 441 Basic School clearing filth before proceeding to the Nima market to join others to do same.

At Kumasi, the Asantehene, Otumfuo Osei Tutu put his hand to shovel and worked with residents to clear choked gutters of filth. Spotting a pink T-shirt, red gloves and a base ball cap, the king showed a lot of enthusiasm and energy as he led the people to clear filth from gutters.

President Mahama, in September, took part in a clean-up campaign at Nima, Teshie, Akoto Lantey and Bukom all in Accra to signal to Ghanaians the need to keep their environment neat and tidy.
Before Saturday’s clean-up campaign, he issued a statement calling on Ghanaians to come out of their homes regardless of their political, religious, ethnic or geographic backgrounds take part in the clean-up exercise since “sanitation is a public good”