Oscar Pistorius out on probation in August 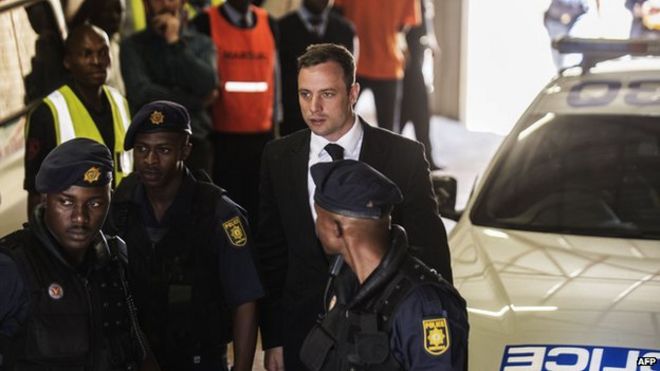 Oscar Pistorius is set to be released on probation on 21 August, South African prison authorities say, after serving 10 months in jail for shooting dead his girlfriend.

The Paralympic star was jailed for five years in 2014 for the culpable homicide of Reeva Steenkamp.

Ms Steenkamp’s parents have said that the time he has served is “not enough for taking a life”.

A state appeal against his acquittal on murder charges is due in November.

Under South African law, Pistorius is eligible for release under “correctional supervision” having served a sixth of his sentence.

South African Commissioner of Correctional Services Zach Modise told the BBC that the case management committee at the Kgosi Mampuru II prison in Pretoria, where Pistorius is being held, made the recommendation last week.

The decision is likely to mean a spell under house arrest for Pistorius.

The double amputee shot and killed Ms Steenkamp through a locked bathroom door at his Pretoria home, believing she was an intruder, he told his trial.

In March a Johannesburg court blocked his legal team’s attempts to stop the prosecutors’ appeal.

State prosecutors say Pistorius should have been found guilty of murder – if convicted he could face a much more lengthy jail term.

Tania Koen, a lawyer for Ms Steenkamp’s parents Barry and June, said that while the two had forgiven Pistorius, “ten months is not enough”.

“It also doesn’t send out the proper message and serve as the proper deterrent as the way it should.”

The decision will reignite a national debate in South Africa about the rule of law, says the BBC’s Milton Nkosi.

Pistorius was born without the fibulas in both of his legs, and had surgery to amputate both below the knee while still a baby.

He went on to become one of South Africa’s best-known sports stars, and was the first amputee to compete against able-bodied athletes at the 2012 London Olympics.