At least 18 people have been killed in a crash between a cargo vessel and a passenger boat on Egypt’s River Nile.

Family and friends of a young couple had hired the boat for an engagement party and were sailing north of Cairo when it was hit, eyewitnesses said.

The interior ministry said the bodies of four babies had been recovered. Several passengers are still missing.

Five people were rescued from the crash scene and the captain of the cargo boat has been arrested.

It is not clear if the couple thought to be celebrating their engagement were among the casualties. 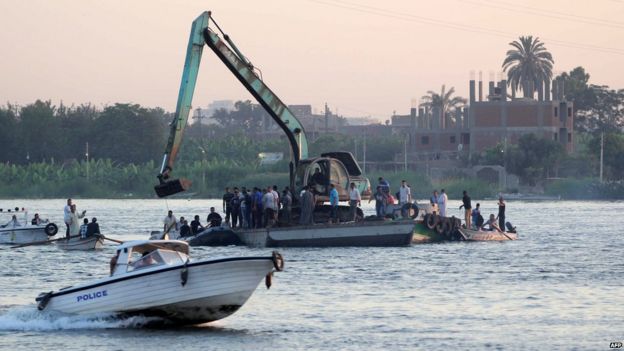 Recovery efforts were delayed by darkness but resumed at first light

Relatives of the dead and missing gathered on the banks of the river to await news of their loved ones.

The wreckage of the boat has now been removed from the water by recovery teams.

Traffic had been heavy along the Nile, where many Egyptians had been celebrating the end of the holy month of Ramadan.