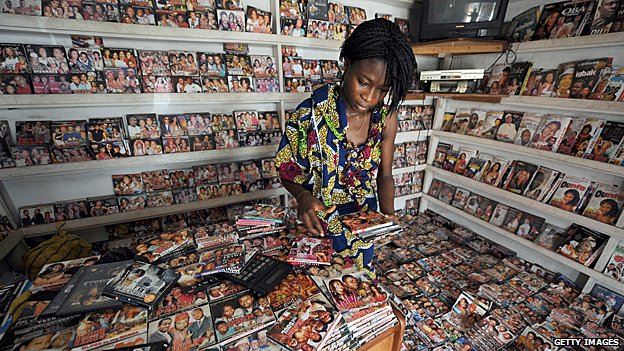 Dedicated follower of film: Nollywood produces more films per year than any country bar India
An episode of Shuga, a popular soap opera set in Kenya, is playing on a screen at the offices of iRoko TV – an online platform commonly dubbed the “Netflix of Africa”.

An episode of Shuga, a popular soap opera set in Kenya, is playing on a screen at the offices of iRoko TV – an online platform commonly dubbed the “Netflix of Africa.”

In a corner of the room, facing the rest of the operation and separated by a glass partition, sits Jason Njoku, the company’s founder.

Born and brought up in London, Njoku is now Lagos-based and building what is proving to be a revolutionary tool, as Nollywood – Nigeria’s Hollywood – moves on from DVD to digital platforms.

Since 2011, iRokoTV has racked up millions of views, its founder says, “connecting African films with fans globally” with its huge online catalogue.

In fact, Jason Njoku says the group spends $3 million-$4 million a year on licensing and producing content, hoping to make back the money in two to three years.

Subscribers pay a monthly fee of $8 with unlimited access to movies from around Africa on the iRoko TV platform, although most productions come from Nigeria and Ghana.

“You look at the stars, you look at the director… super important … you also look at the quality of the actual movies themselves, and we try to sync that with the audience. So, every ten movies we view, we only buy one or two of them.”

It is a model that not many would have thought about a few years ago, but today iRoko’s success has seen the emergence of other competitors.

One, Pana TV, secured the rights to the acclaimed film Half Of A Yellow Sun, which stars Hollywood’s Chiwetel Ejiofor and Thandie Newton.