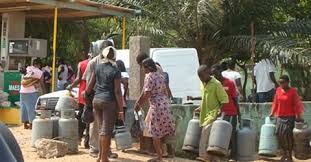 Moses Asaga, Chief Executive of National Petroleum Authority (NPA), has revealed that an average of 228,000 metric tonnes of Liquefied Petroleum Gas (LPG) has been supplied to market from 2010 to date.

This, he said, represented eight percent of petroleum products supplied to the market.

Mr. Asaga, who made this known at the launch of this year’s Consumer Week Celebration in Accra, said consumption of LPG over the years had witnessed a considerable increase.

“It is estimated that auto users of LPG consume about 58 percent of the total annual LPG supplied while households, commercial operators and industry together consume the remaining 42 percent as at 2013,” he disclosed.

“We have accepted LPG as a cheaper fuel. What is left to achieve is to remind consumers on the safe use of LPG.”

Mr Asaga said the consumer week celebration is observed in November each year to educate members of the general public about the safe usage of petroleum products and sensitize them on their rights and responsibilities.

He said there has been series of explosions involving LPG cylinders in various parts of the country in recent times that had resulted in deaths, injuries and destruction of properties worth millions of Cedis.

“There is the need for all of us to observe the safety rules when dealing with LPG from bulk storage haulage, retailing and domestic handling to ensure that these accidents are reduced to the barest minimum, if not completely eliminated.”

John Abu Jinapor, Deputy Minister of Energy & Petroleum, who spoke on the theme, ‘LPG: a friend not an enemy,’ said government was embarking on a rural LPG promotion programme to distribute free LPG cylinders and cook stoves to preserve the forest.

He said so far government has distributed 14, 500 cylinders, cook stoves and accessories to households in the Northern, Upper East, Central and Brong Ahafo regions.

“This is indicative of our resolve to expand the use of LPG to rural areas across the country, and the safe handling of LPG shall be the watchword for us going forward,” Mr. Jinapor said.