Hogbetsotso Festival is celebrated by the people of Anlo in the Volta Region of Ghana. The celebration starts in the month of November at Anloga, which is the traditional and ritual capital of the Anlo state.

Festival is a day that unfolds Ewe history and brings to play the memories of legendary exodus and heroic acts of men of boldness and their mystical powers that liberated the Ewe-Dogbo people from the rule of tyrant King of Kings Torgbui Agorkorli of Nortsie in Togo.

The event brings together all the chiefs and elders of Anlo-land at a colourful durbar to mark the annual event in the Volta Region.

‘HOGBETSOTSO’ is derived from the word ‘HOGBE’ or ‘HOHOGBE’ the day of exodus, the moment in time when the Ewes in the Dogbo quarter of the walled city of Nortsie in Togo.

According to historians, the original home of all Ewes of which the Anlo people form part, is traced traditionally to Oyo in Western Nigeria from where they migrated to their present country in the seventeenth century. There is ample evidence to prove that the Ewes stayed in Nigeria.

Cultural traits of the Yoruba people can be traced among the Ewes of Anlo which is clearly evidenced in musical forms i.e. the Ganu (Anago) dance, ancestral worship, the worship of deities and divination (EFA KAKA) an art perfected by the Ewes while in Nigeria. Other traditions among the Anlo people are TRONUAWO – priest-kings and TROXOVIWO – vestal virgin shrines.

The inhabitants of the Nortsie enjoyed relative peace under various rulers until Torgbui Agorkorli emerged on the scene. He used forced labour from the Ewe-Dogbo people to build a wall around his city which measured 24 feet tall and 18 feet wide, wide enough to allow for patrols with horses. Some historians have agreed that the walls were to prevent slave raiders from attacking the residents in the royal city. Others believe it was prison that they were serving under the king.

History have it that the king’s favorite son Ekpei and the son of Sri I, Atsifoza were engaged in aquatic sport during which the Dogbo royal was almost drowned but Torgbui Sri I conspired with his elders to falsely accuse Atsifoza of drowning their son.

They sent words to King Agorkorli about the supposed death of his son to get Agorkorli’s son killed for the alleged murder. This was a good opportunity to punish King Agorkorli for his wickedness to the Dogbo.

The plan news of the death of the Dogbo royal was executed expertly and Ekpei was taken into hiding while someone who bore semblance to Ekpei was killed and laid in state to make their case. After the funeral, King Agorkorli released his son to be killed under his tough laws similar to the Mosaic Law of “Eye for eye, tooth for tooth.”

At long last the secret of the death was revealed. Sri I was drunk one day and publicly boasted that “MIAWOE NYE ADZA VIWO TSO ADZATOME, AMEMAKUMAKU FE HLORBIALAWO” translated “We are the children of Ham from Ham’s jurisdiction (Egypt), the avengers of the living dead.”

King Agorkorli became incensed when he was informed about the Dogbo deception and ordered the killing of all Dogbo elders in revenge. However, Torgbui Tegli was taken into hiding in a sacred groove in the forests of Nortsie. His son Kelemu who did the job kept the secret and Tegli was ministered to from his hideout. He was the only advisor left among the Ewe-Dogbo people whose solution to problems was without comparison in his time.

The wall of Nortsie was reinforced to prevent any possible escape of the Dogbos. It was said that the bodies and blood of King Agorkorli’s enemies were used to lay the foundation of the wall to spiritually fortify the city. In fact, any escapee was executed.

Many Dogbos died during the construction of the wall because the Nortsie supervisors under instructions from King Agorkorli mixed the clay with thorns, sharp cutting instruments, and broken bottles apparently to exterminate the workforce.

The wall was finally built after a Dogbo spiritualist neutralized the cutting effects of the foreign objects in the clay for the construction work. The wicked King Agorkorli was astonished but continued with his dreadful policies to wipe out the Dogbos in revenge for the killing of his son.

The king ordered the Dogbos to provide him with cord made of clay. There will be mass execution if this difficult and impossible demand is not met. A powerful delegation went to Torgbui Tegli to seek his advice. He told the delegation to go and demand a sample of the clay cord from the king to help the workers to make an excellent pattern out of the old one.

The king was weighed down at the demand of the Dogbos to have a sample of the clay cord which he could not provide. His authority was threatened and he instituted harsher policies that often led to the death of many aliens in his kingdom.

The Dogbo people planned a bloody escape during which the royal guards at the gates to the city would be killed but Torgbui Tegli dropped that plan for a peaceful and tactful escape. He advised that a section of the wall should be mapped and women were instructed to pour household water and water contaminated with menstrual flow at portion of the swish wall.

This was to neutralize the mystical powers that were supposed to have made the wall super-hard because of the infusion of human blood and dead bodies of the king’s enemies during its construction.
The Dogbo women kept the secret and over a long period weakened and desecrated wall with the dirty water.

On the day of departure ‘HOHOGBE’ the Dogbos organized an all-night drumming and dancing session as they often did. At midnight, Torgbui Tegli, carrying ‘ADEKPUI’ the dagger of liberation, was whisked into the city. He was spiritually shielded from the eyes of enemies as he possessed mystical powers and spirits of the forbearers.

He pierced the wall with the dagger to cancel the occultic powers of the wall and the men brought the wall down.
The people fled backward through the broken wall to freedom under the command and leadership of Torgbui Tegli. Torgbui Tegli was too weak after he undertakes the long journey but he vanished and relocated himself in a distant land where he died and joined the ancestors in the land of death.

The forebears of the Dogbos, after wandering, they entered Ghana and finally broke into smaller states namely Anlo, Asorgli, Gbi, Akpini, Tornu, and Hokpe. When Amega Wenya led his people from HOGBE, he founded many communities along the route and upon reaching Anloga.

The old man told his tribesmen that he is tired. The ewe state have two main groups, the southern Ewes which includes the Anlos with their kingship traditional headquarter at Anloga; the northern Ewes, referred to as the Ewedomeawo who inhabit the central belt of Ghana.

After the people of Anlo flee Nortsie they forgot to carry their ivory stool (NYIDUZI) which is the soul of the people and the rain making stone Tsikpe, which were confer on to Sri I by his father Adza Asimadi through Adela Blebua. The absence of these items was said to have brought calamity to the Anlo state after much divination from the gods. They revealed that unless these items were brought back to Anlo land there will be no peace for the people.

Fui, the son of the AWOMEFIA was the ideal candidate to undertake the expedition but his mother and uncle strongly opposed the decision for fear of his life. Adeledzea, the AWOMEFIA’S nephew agreed to go for the items. After two expeditions to Nortsie the mission was accomplished and the items were returned to Anloga.

To reward Adzeladzea, Torgbui Sri I decreed that after his death he (Adzeladzea) should become the next king but succession should be reversed to his children after Adzeladzea’s death. This act of valour by Adzeladzea created the rotary system of kinship in Anloga.

The Anlo state instituted a centralized traditional executive authority, an administrative and judicial institutions which are run by chiefs and elders of the state whose head is the AWOMEFIA. The King is attributed with the powers of divinity and lives in a sacred place ‘AWOME’ made holy by the presence of the ancestral gods. The Anlo kingship adheres strictly to a rotary system.

According to Anlo practices, when it is the turn of a clan to provide a king the elders of the clan meet to select a candidate on the basis of physical appearance, intelligence and good character. Usually the various segments of the clan each present their own candidates. They compete with one another for sometime before a candidate acceptable to all emerges.

The stool belonged to the Adzovia clan. The Bate clan acquired succession rights as reward for a service performed by Torgbui Adzeladzea for his mother’s brother (Uncle) Sri the founder of the Adzovia clan.

Subsistence agriculture is common and crops grown include cassava, maize, pepper, vegetables. The application of guano and cattle dung to improve the fertility of the heavy clay soil in the neighbourhood of Anloga has given rise to an effective onion growing industry.

The mixed economy of Anloga also includes a well-developed kente weaving industry, poultry production and the rearing of pigs and ducks. Anlo land includes the coastal belt lying between Anyanui at the estuary of the Volta Lake, and Blekusu located about five kilometers east of Keta. It also extends north of the Keta Lagoon as far as Abor more than 40 miles. The festival has a host of other celebrations associated with it. There is a period of peace making. During this period, all outstanding disputes must be resolved. The aim is to bring the people together to live in harmony with each other.

There is also a general cleaning in the town. The whole town is swept, gutters cleaned, bushes are cleared and everywhere is kept clean. The cleaning which starts at the estuary of the Volta River, goes on until it reaches the Mono River in Benin.

This cleaning exercise is all inclusive and everyone in the town is supposed to take part. The people of Anlo believe that if they keep their surroundings clean, and they live in harmony with each other, no evil can befall.

They believe that their ancestors lived in harmony with each other all throughout their journey and that is what helped them to arrive at their destination.

Therefore if they also want to be able to live in harmony, they must love one another. The cleaning continues for days until everywhere is well kept. The highlight of the Hogbetsotso Festival celebration is a grand durbar of the chiefs and people of the town. There is drumming and dancing and merry making.

The dancing is the most intriguing part, with the very popular “BORBORBOR” dance which is very intense and fun filled. 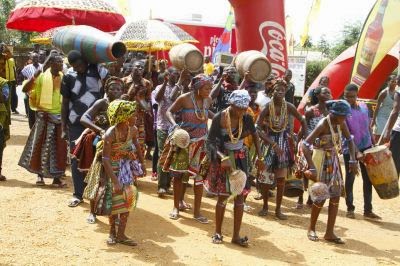