Traditional wedding ceremony in Ghana is performed to legitimatize the marital relationship between a male and a female.

Until the ceremony is done children born out of the relationship are considered to be bastards.

The way the ceremony is done and the things required at the ceremony vary from different ethnic groups in Ghana.

However, the information below seeks to provide a general guidance on what will be expected from individuals who plan to go through the ceremony. The man (groom) is expected to present certain items (openly) at the ceremony. It can be embarrassing not to have certain ‘important’ things which are expected to be presented openly.

The best way to know the things required of you is to go with the bride (fiancée) to meet her parents (or representatives if parents are not available) to ask for the list of things they expect you to present on the day of the ceremony.

We have listed below some of the thing which will be required and their significance.

A price a groom should be prepared to pay if he has intended to marry a certain young woman on whom he had set his sights on ever since they started dating.

In Ghana, it forms a key part of the traditional wedding ceremony where the groom presents money, property or some form of wealth to the brides family in exchange for the loss of her labour and all that she has to offer.

Over the years, bride price has changed / evolved from family to family. There are some commonalities, which can be found in most families.

2. Dowry /or bride price – often an undisclosed sum of money,

This forms a key part of the traditional wedding ceremony where the groom presents money, property or some form of wealth to the bride’s family.

Significance: It serves as an exchange for the loss of her labour and all that she has to offer to the family. Also in the olden days, the money presented to the bride was meant to be used as capital for setting up her own business or trade to support the family.

3. Money for the bride’s father

This is normally a piece of kente cloth and money.

This is to appreciate the man who fathered the bride from childhood into womanhood. If her father isn’t present, a man who took a fatherly role can be presented with this.

4. A present for the mother of the bride

This is normally normally a piece of Kente cloth and money

This is to appreciate the woman who nursed the bride from a suckling to the beautiful woman now ready to marry. A certain amount of money is given her.

The linguist of the family praises the mother for the special role she played in the upbringing of the bride.

This is a traditional drink, which is meant to ask permission before speaking to an elderly person in the bride’s house. The groom’s family knocks the door/gate of the bride’s house before they are allowed into the house. The bottles are presented with some amount of money or could be just money.

6. Present for the bride

Jewelry, headscarves, shoes and at least 6 pieces of traditional wax print cloth are presented to the bride. The cloths should be of different colours to enable her to use them on different occasions. For example, there should be two pieces of white cloth which she can wear after delivery of her first child.
7. Engagement ring

This is worn by only the bride to signify that she is married. The man (groom) is not given a ring at the ceremony.

This is presented to the bride (if she is a Christian) so she can read in good/bad times.

9. Money for the brothers ( or male cousins if bride has no brothers)

This money is given to the bride’s brother who has managed to ensure no other men came sniffing around the bride whilst dating the to-be groom. If she doesn’t have a brother, a male cousin can take the position.

The family of both the groom and the bride (as well as friends) will be present at the ceremony. The food and the drinks are used to serve all the guests to make merry.

How the traditional wedding ceremony is performed in Ghana

On the set date the groom and his family, along with invited guests show up early at the bride’s house.

The groom’s family knocks at the door/gate by saying ‘agoo’ to which the bride’s family responds ‘amee’.

The ceremony begins with a short prayer.

Introduction of each family member

The linguists introduces each family member present. The groom’s family is introduced first because they are the ‘visitors’.

The groom’s family begins by presenting the dowry and all the other items on the list one, by one. At each stage, the items are checked to make sure everything asked on the list is being presented.

Introduction of groom and bride

The groom is introduced to the bride’s family after the latter is satisfied that all the items required have been presented.

After the groom has been introduced, a member of the bride’s family is asked to go and bring the bride to the gathering.
A decoy can be used to “tease” the groom before the actual bride is brought. The groom is then asked to confirm if she is indeed the bride.

Once he confirms, she is asked three times by her father if she agrees to marry the groom. She is asked if they should accept the dowry and accompanying gifts from the groom’s family. Her acceptance is greeted with jubilation. 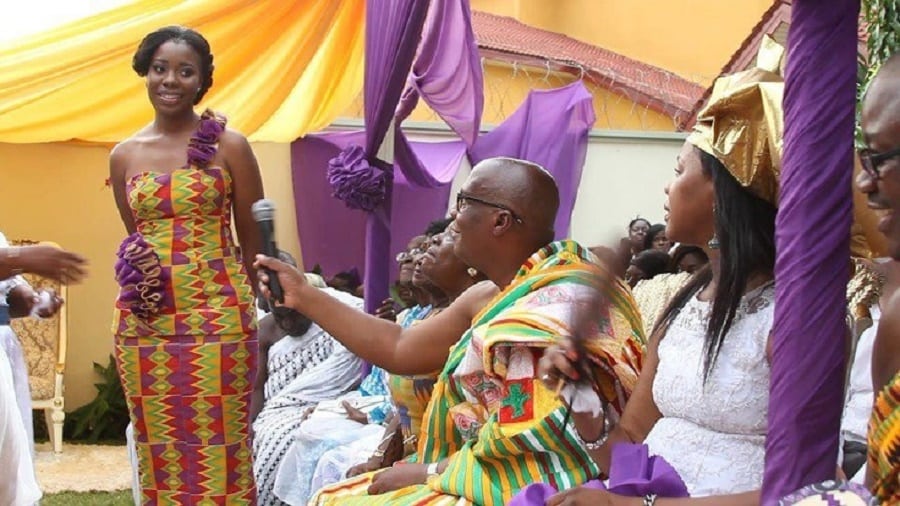 When she agrees, then the groom will slide the ring onto her fingers and kiss and hug her. An elder (or a Pastor) presents a bible to the bride as a symbol of how important God should be in their married life. The groom and bride who are now husband and wife sit together for the rest of the ceremony. 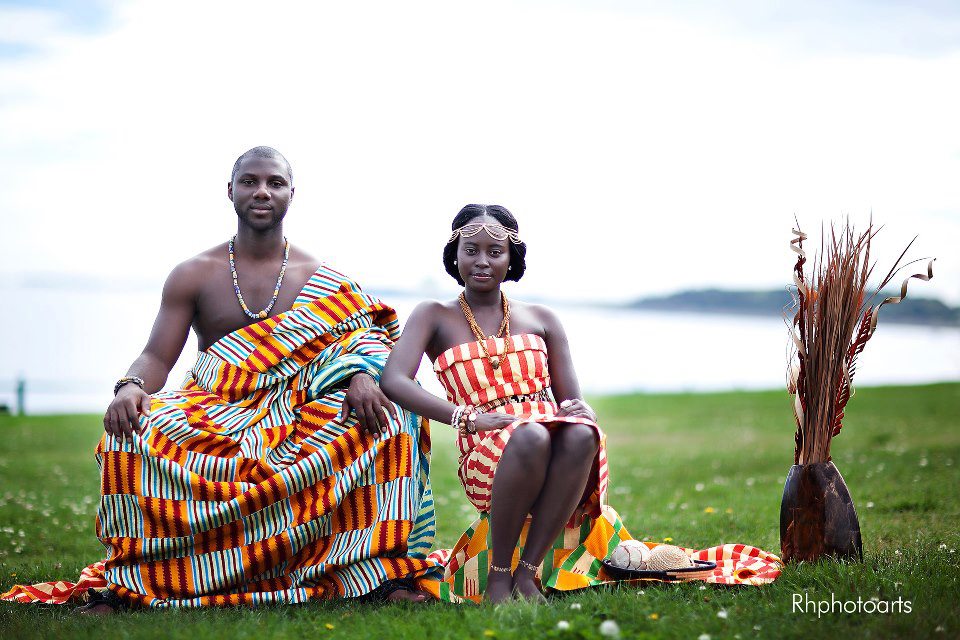 Prayers are said and blessings are given. The married couple is then congratulated and some elders offer marriage advice to the new couple.

Once all of this is done there is a huge celebration/reception where food and drinks are served.

There is lots of music and wedding till everyone gets tired. This can be a costly affair for the groom so should be planned carefully!

The parents of the bride can make heavy demands of the groom to bring as much money as he possibly can to assure the bride’s parents that he is capable of looking after his woman before the father of the bride will even agree to give his beloved daughter away. This is why it is important to ask for details of the items required before the ceremony itself. You can negotiate before the ceremony if you cannot afford the total cost.

In the days of old, the traditional wedding was a small affair with the event being witnessed solely by the immediate family members. But these days, the number can be large and the associated expenses very costly. You can manage this somehow by limiting the invitees (both family and friends).