Kweku Ananse and his Mother-in-Law

Water was served, a comfortable bed was laid for him to relax in and Kweku Ananse afterwards told his external relations a lot about how lovely their daughter, Okonowe Yaa had been to him in their years of marriage.

He told them folktales and spent some time telling them about his heroics on his farm though at most times, he fabricated some of these stories.

Then the time for food service approached. Kweku Ananse had to get a very big share of the food served that evening with all the fat meat he had been craving for. His mother-in-law served Kweku Ananse but as gentle as he disguised himself to be, the visiting Ananse refused to take the meal though he was a very hungry man.

He calmly rejected the food even after countless pleas from  Yaa-Yaa Kesewaa. Kweku Ananse  was supposedly putting up his best behaviour. For someone who had traveled a long way to this village, his favourite meal, fufu, could not be rejected.

Then Yaa-Yaa Kesewaa, though she really wanted Ananse to taste her meal, expressed her appreciation over the gentle manners Kweku Ananse possessed. She called all her friends in the village to come see the man her daughter had brought into their family.  A man who takes in little food and exhumes lot of excitement. She was so proud of Kweku Ananse that she invited the best singers in the village to come entertain her son in law.

The round of music went on and on but Kweku Ananse had other plans. The hungry Kwaku Ananse sneaked into the kitchen when his mother in law had stepped out of the house so he could find something to eat. Ananse was not being a gentleman earlier at all. He was only shy to take his meal in the presence of his mother in law; he also wanted his balls of fufu bigger and heavier than what was served him. What the cunning Ananse wanted to do was to have his freedom and eat all he could.

Just when he was about to throw the first blow of fufu into his mouth, his mother in law bumped into the house and shouted; “Kweku!!. Kweku Ananse my good looking, gentle acting son-in-law, where are you?”

The confused Kweku Ananse had no option in the kitchen than to hide the hot bowl of ‘fufu’ on his head and cover the food with his hat! And yes he did that.

Kweku Ananse hurriedly washed his hands, wiped his face and hid the bowl in his hat. The hot soup heated up the bald head of the uncomfortable Kweku Ananse.

Immediately he stepped out of the kitchen, he informed his mother-in-law about his intension to leave. Ananse had promised to leave for his village the following morning but insisted he had to leave at that very moment. The obviously surprised mother-in-law insisted Kweku stayed behind but the then perplexed Ananse tried stepping outside so at least he could take the heat off his head. 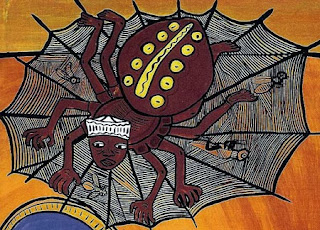 Just when he stepped out of the door, the ‘fufu’ fell off his head. The heat was too much for the bald head. What a shame! The now stupid looking Kweku Ananse bowed his head in shame and pleaded for forgiveness.

The mother-in-law hurriedly sent him away and asked that the children in the village hooted at him till Kweku Ananse reached the junction leading to his village. The disgraced Ananse ran away from the crowd till he was out of breath. He then jumped into the corner of a nearby house where he settled to weave his web and lie in there thinking about the next trick to pull in life.

Moral of the Story: Stay honest and let those closest to you know how you truly feel. Don’t play the comfortable card and stay uncomfortable in secret.