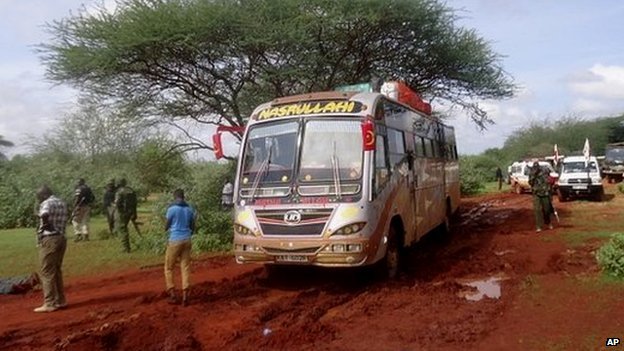 Hundreds of people have fled to a military airstrip in Kenya’s Mandera region amid fears that militants could launch a new assault.

Many of them are non-Muslim civil servants who are demanding that the government evacuate them from the region, a BBC reporter says.

Kenya’s President Uhuru Kenyatta is under growing pressure to end attacks by the group.

Al-Shabab is based in neighbouring Somalia, but has stepped up attacks in Kenya since 2011, when Kenya sent troops across the border to help battle the militants.

The BBC’s Wanyama Chebusiri in the capital, Nairobi, says the opposition and some ruling party MPs are calling for an overhaul of Kenya’s security agencies, including the dismissal of Interior Minister Joseph Ole Lenku and police chief David Kimaiyo.

About 100 people protested in the capital Nairobi on Tuesday, chanting: “Mr President, we demand security.” 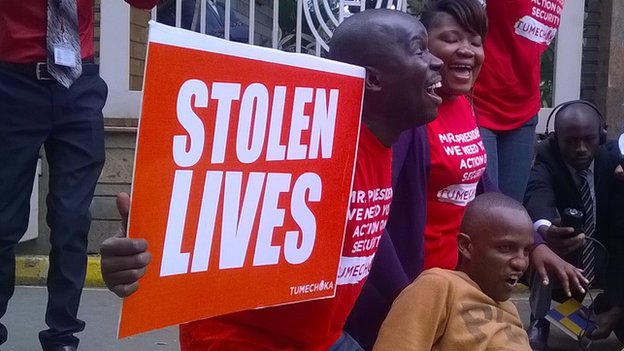 Demonstrators rallied in Nairobi to protest against the escalating conflict

Mr Ole Lenku has flown to the restive Mandera region in an attempt to allay the concerns of people, our reporter says.

There are no reports of a specific threat, but many people in Mandera are worried that al-Shabab could strike again, especially as the festive season approaches, he adds.

Six unions – including those representing doctors, teachers and civil servants – have advised members to leave until security forces can ensure their safety.

The call could affect more than 10,000 teachers and 16,500 civil servants in major towns such as Mandera, Wajir and Garissa, Kenya’s Daily Nation newspaper reports. 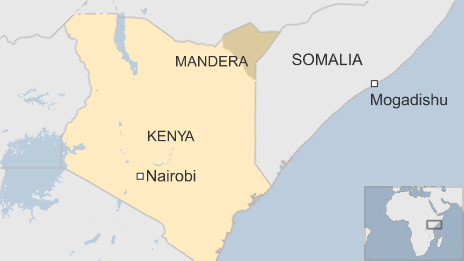 “Their lives are clearly in danger,” Kenya Union of Teachers leader Wilson Sossion is quoted as saying.

“We have already lost enough members of the teaching force and can’t risk any further,” he added.

Our reporter says 20 of the 28 killed in the bus attack were teachers who were returning to their homes for the Christmas holidays, following the closure of schools.

Many of the teachers, doctors and government officials who work in Mandera are from other parts of Kenya and no longer want to stay in the north-east, which borders Somalia and has been badly affected by al-Shabab’s insurgency, our correspondent adds.

Hundreds of people have left their homes with their belongings and are now camping at the Kenya Defence Forces (KDF) airstrip, demanding that they be given safe passage out of Mandera, he says.

Deputy President William Ruto has said the military has killed more than 100 al-Shabab militants linked to the bus attack.

The armed forces carried out two operations in Somalia, destroying equipment and a camp from which the bus attack was planned, he said.

However, al-Shabab has denied this, and says that its fighters were safe.

In Saturday’s attack, gunmen pulled non-Muslim passengers from a bus in northern Kenya, killing 28 of them.

Al-Shabab said it carried out the assault in retaliation for a government crackdown on mosques in the Kenyan coastal city of Mombasa that were allegedly used by extremists.