Islamic State says California killers of 14 were their followers

Islamic State said on Saturday that a married couple who killed 14 people in California in an attack the FBI is investigating as an “act of terrorism” were followers of the militant group based in Syria and Iraq.

The group’s declaration, in an online radio broadcast, came three days after U.S.-born Syed Rizwan Farook, 28, and his wife Tashfeen Malik, 29, a native of Pakistan, carried out the attack on a holiday party for civil servants in San Bernardino, about 60 miles (100 km) east of Los Angeles.

The two died hours later in a shootout with police.

U.S. government sources have said Malik and her husband may have been inspired by Islamic State, but there was no evidence the attack was directed by the militant group or that the organization even knew who they were. The party the couple attacked was for workers in the same local government agency that employed Farook. 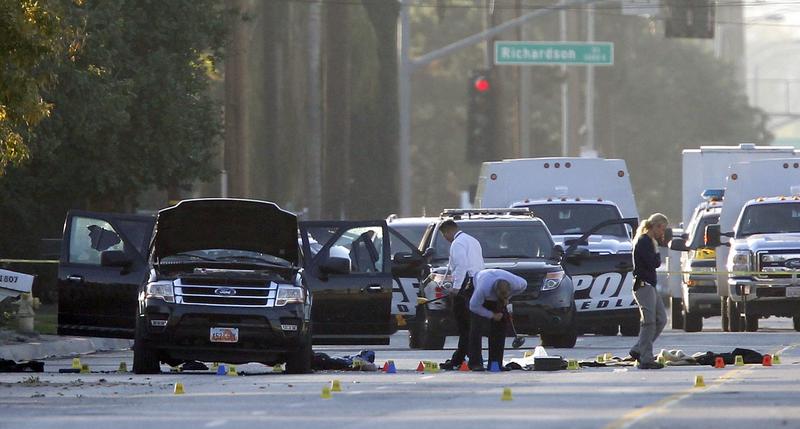 If Wednesday’s mass shooting proves to have been the work of people inspired by Islamist militants, as investigators now suspect, it would mark the deadliest such attack in the United States since Sept. 11, 2001.

Two ethnic Chechen brothers inspired by al Qaeda killed three people and injured 264 in a bombing attack on the Boston Marathon in April 2013.

An English-language version of the broadcast was later released calling the attackers “soldiers” of Islamic State, rather than “followers” as in the original Arabic version. It was unclear if the English version was claiming them as members, or why there was an inconsistency.

The broadcast came a day after Facebook confirmed that comments praising Islamic State were posted around the time of the mass shooting to an account on the social media website established by Malik under an alias.

However, it was uncertain whether the comments were posted by Malik herself or someone with access to her page.

“There was a pledge of allegiance,” David Bowdich, assistant director of the Federal Bureau of Investigation’s Los Angeles office, told a news conference about a reported loyalty pledge posted on Facebook by Malik on the day of the attack.

A Facebook Inc spokesman said the profile in question was removed by the company on Thursday for violating its community standards barring promotion or praise for “acts of terror.” He declined to elaborate on the material.

“Ye are now investigating these horrific acts as an act of terrorism,” Bowdich told reporters.

He said the FBI hoped examination of data retrieved from two smashed cellphones and other electronic devices seized in the investigation would lead to a motive for the attack.

The couple had two assault-style rifles, two semi-automatic handguns, 6,100 rounds of ammunition and 12 pipe bombs in their home or with them when they were killed, officials said. Bowdich said they may have been planning an additional attack.

The attack prompted the New York Times to run its first front-page editorial since 1920, saying it was “a moral outrage and a national disgrace” that the sort of firearms used in the attack were so readily available.

“These are weapons of war, barely modified and deliberately marketed as tools of macho vigilantism and even insurrection,” the newspaper said.

Speaking to reporters in Washington on Friday, FBI Director James Comey said the investigation pointed to “radicalization of the killers and of potential inspiration by foreign terrorist organizations.”

But no evidence has been uncovered yet suggesting the killers were “part of an organized larger group, or form part of a cell,” Comey said.

Citing an unnamed federal law enforcement official, the Los Angeles Times reported late on Friday that Farook had “some kind” of contact with people from the Nusra Front and the radical Shabab group in Somalia. But the nature of that contact and with whom was unclear, the Times said.

President Barack Obama vowed on Saturday in his weekly radio address that federal investigators would find out what motivated the married couple to attack.

“We are strong. And we are resilient. And we will not be terrorized,” Obama said.

Farook family attorneys, holding a news conference in Los Angeles on Friday, denied there was any evidence that either the husband or wife harbored extremist views.

She spoke broken English and her primary language was Urdu, he said, adding, “She was very conservative.” They said Farook, too, largely kept to himself, had few friends and said co-workers sometimes made fun of his beard.

Investigators are looking into a report that Farook had an argument with a co-worker who denounced the “inherent dangers of Islam” prior to the shooting, a U.S. government source said.

Pakistani intelligence officials have contacted Malik’s family in her homeland as part of the investigation, a family member said.