If You Didn’t Play Any of These, You Are A Z-Generation Baby

The ‘rich kid’ life was one that the not so ‘rich kid’ watched and wished for. The piano lessons, ballet dance classes and swimming lessons was one every child would have enjoyed.

However, the not so rich kids were not devoid of immense entertainment when it came to enjoying their childhood games. While the ‘rich kids’ were having fun with their PlayStations and Xbox in their rooms, the real fun was going on outside.

Let’s enjoy a couple of those games and how they were actually played.

Basically, the Ghanaian version of cricket played with old tins and cans. The cans are then flattened with a stone or any heavy object. Players find a big old basin or car tyre as the target hole.

Each one is made to throw his flattened tin into the car tyre. The one who is not able to make it to the target for the first time becomes the victim. The remaining stand around with tyre with  a stick with the aim of preventing the person from throwing the target into the tyre.

The defender has a stick hitting away the tins as attackers try to put them in the basket. Dadabees can never relate to this kind of fun

This is a game best played with a group of four or more, but just two people will do, too. It’s an active game, with so much clapping, singing, and jumping involved that it almost looks like a dance.

It’s a game that’s been past down from generation to generation. A leader is chosen and the rest of the group either stand in a semicircle or split into groups of two.

The leader begins by jumping, and when you land from your jump, you place one leg forward. Points are earned depending on which leg (left or right) meets the opposite leg of your opponent first. Everyone gets a chance to be the leader and usually the first person to reach 10 points wins!

Eleven players represented by counters (crown corks) with creatively designed team colours made on paper. Put your knees on the ground and get ready for a great battle in counters ball. You play one, I play one. The feeling cannot be described.

This is another format of football. However, there are no posts and no set limit with regards to pitch size. Defender catches ball, says ‘Stay’. He throws the ball at an opponent who must not dodge but kick the ball. Defender must either catch the opponent on the arm with the ball or catch the ball before it hits the ground.

Once defender catches, the said attacker becomes the defender. Now you don’t wanna be a defender in this game. How people will send you around with the ball, only God knows that pain. 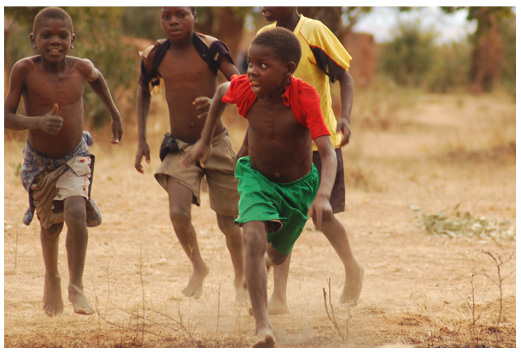