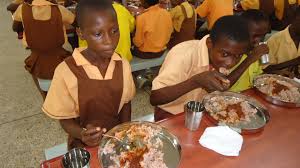 Government, in a desperate move to sustain the School Feeding Programme, has resorted to holding discussions with interest groups in order to raise funds.

For several months, government has been indebted to caterers it contracted to cook for children in selected schools under the programme across the country.

The Executive Director of the Ghana School Feeding Programme (GSFP) S.P. Adamu in July conceded that the programme was broke and unable to pay its caterers. In September, 417 caterers in Volta Region threatened to stop feeding the kids because government owed them close to one million Ghana Cedis.

Today in Parliament, government admitted that it owes caterers under the School Feeding Programme more than a hundred million cedis.

Unfortunately, it says it cannot pay them until the district assemblies get their portion of the Common Fund, Joy News’ Elton John Brobbey reports.

Government has not released the statutory funds to the districts for almost a year, resulting in a slowdown in development in many areas.

Government is therefore inviting the interest groups as a stopgap measure to resource the Common Fund to enable it pay caterers whilst it waits for the Finance Ministry to release money to the Local Government Ministry.

According to Nii Lante Vanderpuye, “government has so far paid 151 days representing an amount of Ghc 147 million. Government is left with a debt of Ghc 101m representing 76 days to settle”.

However, the Local Government Ministry, he said, has set up a monitory and evaluation team to go round the schools to ensure that children are served with quality food, notwithstanding government’s inability to raise the needed funds to pay caterers.