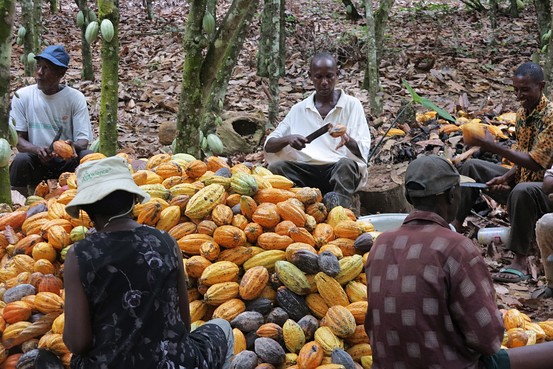 A 41% drop in the value of Ghana’s currency this year means that Ghanaian cocoa farmers can get 58% more in dollar terms for their cocoa beans in Ivory Coast, pan-African bank Ecobank reports in a note.

The drop in the cedi, Ghana’s currency, “has eroded farmers’ real incomes…and has driven a surge in bean smuggling to Cote d’Ivoire in search of better prices,” the bank says.

Ivory Coast is the world’s top-grower of the beans, while Ghana is No. 2. The West African region as a whole accounts for about 70% of global cocoa output.

Both countries are struggling to expand production amid surging global demand for chocolate products. Cocoa for delivery in September on the ICE Futures U.S. exchange was trading at a three-year high of $3,234 a ton earlier on Thursday.

It’s the sixth consecutive session of gains for cocoa prices after demand in North America and Asia beat analysts’ expectations. Cocoa processors in Asia ground 161,805 metric tons of beans in the second quarter of the year, up 5.2% compared with the same period of 2013, the Cocoa Association of Asia said Friday. The report followed a 4.5% increase in North American second-quarter cocoa grindings, which topped market estimates of 2% to 3%.

On Thursday, a unit of confectionary company Mars said it has raised prices for U.S. chocolate products by about 7% to offset rising costs. The M&Ms and Snickers maker’s announcement comes a week after Hershey raised its prices by 8% due to higher costs for cocoa, milk and other commodities.

To encourage farmers to keep producing cocoa and stop the smuggling, Ecobank recommends that Ghana’s cocoa-industry regulator substantially raise the fixed farm-gate prices that producers receive for their beans.