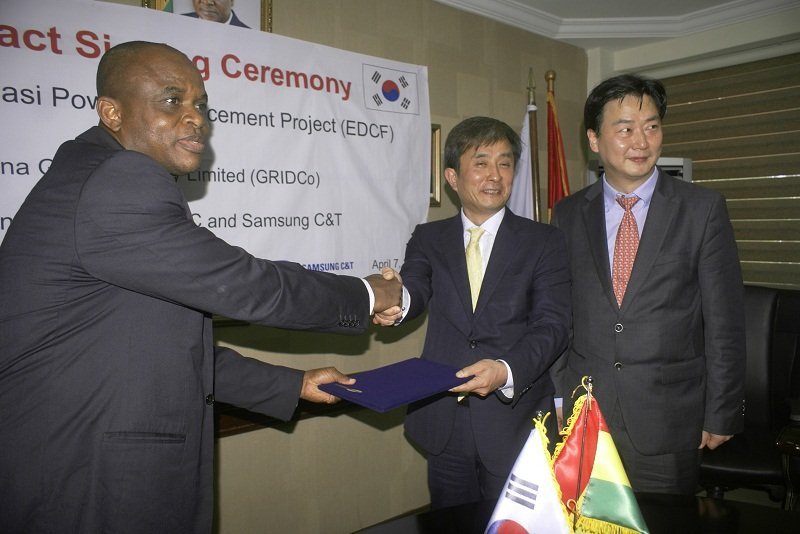 Government has signed a $60 million loan agreement with the Korea government for the construction of 185 kilometre, 330 kilovolts power transmission lines.

The government, through the Ghana Grid Company (GRIDCo), signed the agreement with a consortium of companies from Korea to undertake the project from Prestea in the Western Region to Kumasi in the Ashanti Region.

Under the agreement, GS engineering and construction and Samsung C and T, both Korean companies would undertake the project, which is being financed through a concessional loan facility from the Koran Export-Import Bank.

GRIDCo would over¬see the implementation until its completion by the first quarter of 2017.

Minister of Power, Dr. Kwabena Donkor, who initiated the project for Ghana, com¬mended the Korean government for supporting operators in the power sector.

He said Ghanaians appreciate the numerous services the Korean government, through many of its companies, have pro¬vided to facilitate development in the power sector.

Dr. Donkor said the project has come at an appropriate time when Ghana was dealing with the power crisis in order to emerge as a major energy powerhouse in the sub-region in the near future.

William Amuna, Chief Executive of GRIDCo, said the project, when completed, would be of immense benefit to the country, stating that the transmission lines would transport electricity from the southern to the north¬ern part of the country.

Mr. Amuna said the Prestea-Kumasi power enhancement project was a component of the 330KV transmission network which originates from the Aboabdze Thermal Power Plant in the South to Bolgatanga in the North.

He said the transmission lines are to be connected to Kumasi, with the final part being the Kumasi-Kintampo- Tamale-Bolgatanga stretch.

Mr. Amuna said GRIDCo is also looking at the possibility of connecting the lines to Accra to create triangular transmission lines across the country to enhance electricity distribution.

He said the project would also help reduce transmission losses from the current 4.5 percent position to three percent, adding that it would enhance delivery and improve penetration levels to the hinterlands.