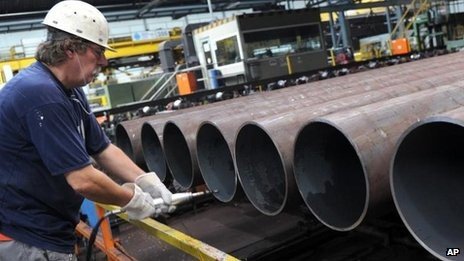 The fall was the biggest since early 2009 and was far sharper than the 1.5% drop expected.

Weak demand for goods in both the eurozone and China, and disruption to trade with important trading partner Russia, are holding back orders.

On Monday, figures showed factory orders were down 5.7% in August.

The fall in production came in sharp contrast to the rise of 1.6% recorded in July, although that was revised down from the initial estimate of 1.9%.

The country’s economy started 2014 well but reversed to shrink by 0.2% in the second quarter.

Business confidence in the country has been falling for five months and evidence is building that the economy barely grew in the third quarter at best.

The ministry said the timing of holidays had exaggerated the decline, but acknowledged that industrial production was “currently going through a weak phase… all in all, one should expect weak production for the third quarter as a whole”.

Timo del Carpio, european economist at RBC Europe said the number was “surprising even relative to our own below-consensus estimate”.

Germany’s economic woes will be of great concern to the eurozone, which is battling persistently low growth and low inflation.

The economies of France and Italy continue to struggle.

The BBC’s economics correspondent, Andrew Walker, said: “Germany has been a relatively strong performer during the eurozone’s financial crisis so the signs of weakness are a real concern for the region, where an unconvincing economic recovery had already stalled.”

As well as launching an asset purchase programme, through which it will buy debt products from banks, the ECB cut its benchmark interest rate to 0.05%.