The Turkish military has deployed in Istanbul and Ankara, and the government has apparently blocked social media in response to what is being reported as an attempted coup.

Access was restored after about an hour-and-a-half, according to the research agency Dyn Research.

Some residents of Turkey appeared able to access social media, likely via a VPN or some other anonymizing service. Anyone affected might want to try Tor Browser(for Windows and Mac OS) or Orbot (for Android). The U.S. State Department acknowledged reports of a social media block in the country and suggested anyone trying to contact friends or family use email, text messages, or phone calls instead.

Twitter’s policy team said it did not think the site was fully blocked in Turkey. “We suspect there is an intentional slowing of our traffic in country,” Twitter said in a statement posted in English and Turkish. Twitter’s live-streaming app Periscope and Facebook Live appeared unaffected, broadcasting several live streams from Istanbul.

Facebook did not provide a statement on the reported blocks. “We are aware of reports that YouTube is down in Turkey, however, our systems seem to be functioning normally,” a YouTube spokesperson told TechCrunch.

Many in Turkey are publishing images of military occupation of important landmarks like bridges, and one tweet shows what appears to be a fighter jet flying very low over Ankara. Tanks have been photographed at Istanbul’s Ataturk Airport. 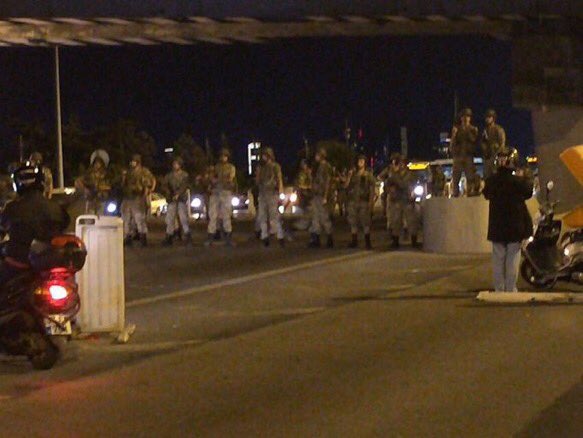 The Associated Press reports that the Turkish prime minister, Binali Yildirim, has confirmed that there has been a coup attempt by a group within Turkey’s military. Fighting is apparently ongoing. President Erdoğan appeared on Turkish television via Facetime to address the coup.

The following statement from the group was reportedly read on local television:

Turkish Armed Forces have completely taken over the administration of the country to reinstate constitutional order, human rights and freedoms, the rule of law and the general security that was damaged. All international agreements are still valid. We hope that all of our good relationships with all countries will continue.

Whether it is true is unclear.

The Telegraph is updating live.

This story is developing; we will continue to update it as more information becomes available.