A Malian nurse has died of Ebola, the second confirmed death from the disease in the country.
Officials say the nurse had treated a man who arrived from Guinea at the Pasteur Clinic in Bamako, and the clinic was now in quarantine. 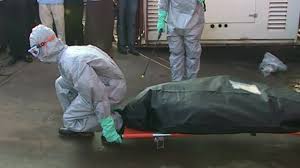 The latest case is unrelated to the first, when a two-year-old girl died from the disease in late October.

Nearly 5,000 people have been killed in the West African outbreak, mostly in Guinea, Liberia and Sierra Leone.

The World Health Organization (WHO) has declared the outbreak a global health emergency.

The new case in Mali comes a day after the WHO confirmed the release from quarantine of 25 of 100 people who were thought to have come into contact with the two-year-old girl who died on 24 October.

The toddler’s case alarmed the authorities in Mali after it was found she had displayed symptoms whilst travelling through the country by bus, including the capital Bamako, on her return from neighbouring Guinea.

Ebola was first identified in Guinea in March, before it spread to neighbouring Liberia and Sierra Leone. The WHO says there are now more than 13,240 confirmed, suspected and probable cases, almost all in these countries.

Cases have also emerged, though on a much smaller scale, in Nigeria, Senegal, Spain and the US, as well as in Mali.

Separately on Tuesday, it was confirmed that Morocco would no longer host the 2015 Africa Cup of Nations because of its fears over the Ebola outbreak.