A wave of attacks by female suicide bombers in north-eastern Nigeria has killed more than 50 people.

In the latest blasts two bombers struck a market in the town of Madagali in Adamawa state, an army official said. More than 25 people were killed.

In neighbouring Borno state, several attacks in Maiduguri killed more than 30 people and injured over 100.

The attacks are being blamed on the group.

The BBC’s Abdullahi Kaura Abubakar in the capital, Abuja, says Boko Haram jihadists appear to be trying to prove that they can still inflict widespread destruction.

President Muhammadu Buhari, who took office in May promising to defeat the group, told the BBC last week that the militants could no longer mount “conventional attacks” against security forces or population centres.

It had been reduced to fighting with improvised explosives devices (IEDs), he said.

Further north, during an attack on Dawari village on the outskirts of Maiduguri, security forces had intervened and killed 10 suicide bombers, spokesman Col Mustapha Anka said.

Muhammad Kanar, from the National Emergency Management Agency, told the BBC the injured had been taken to three hospitals in the city for treatment.

Hours later a female suicide bomber killed one person as people queued in the morning by a mosque in the city.

A resident in Maiduguri’s Ushari Bulabulin district, who asked not to be named, told the BBC Hausa Service: “People were being scanned before they were allowed to pass, and she went into the middle of the gathering. She killed one person and injured six or seven…

The military has not commented on the latest attack on the mosque, which is believed to be about a kilometre from the village. 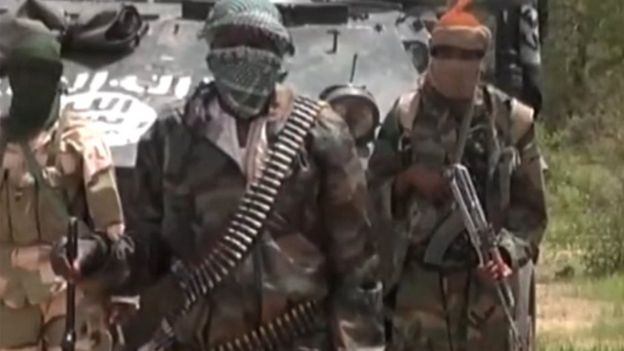 Boko Haram’s six-year insurgency in north-eastern Nigeria has led to the deaths of some 17,000 people, destroyed more than 1,000 schools and displaced more than 1.5 million people.

It has been described as one of the world’s deadliest terror groups.

Only a few days ago, Islamic State, to whom Boko Haram is affiliated, said its West Africa division had launched more than 100 attacks – killing more than 1,000 people – over the past two months, the Site Intelligence Group, with monitors jihadist websites, reported.

Critics of the government argue that it has exaggerated the scale of its success against the militants, and that each time the army claims to have wiped out Boko Haram, the militants have quietly rebuilt.