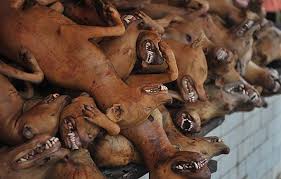 Dog meat sellers at the Sunyani market in the Brong Ahafo region are appealing to government for support.

According to the butchers, the dog meat business can be the mainstay of Ghana’s economy if given the needed support to expand their business.

One of the traders who spoke on condition of anonymity to Accra based radio station Oman FM said dog meat has become the delicacy of many after the outbreak of the deadly Ebola virus.

He said it is highly patronized by indigenes of Sunyani, Bolgatanga and other towns in the northern region to fish and meat.

“Anyone who eats dog meat cannot be harmed spiritually by an evil spirit,” the dog butcher stated sarcastically.

The dog seller noted that government’s support will motivate them to step-up their production just like poultry farms across the country.

“There were plenty dead dogs hanged in the market and customers were negotiating to grab their delicacy home for their meal,” the reporter said.