David Cameron has angrily insisted the UK will not pay £1.7bn being demanded by the European Union.

“If people think I am paying that bill on 1 December, they have another think coming,” the prime minister said in Brussels. “It is not going to happen.”

But Commission President Jose Manuel Barroso said the demand should “not have come as a surprise” to the UK.

He said it was made under a system agreed by all the member states and based on data provided by them.

EU finance ministers have agreed to the UK’s request for emergency talks about the top-up payment, which would add about a fifth to the UK’s annual net EU contribution of £8.6bn.

Mr Cameron said he was “downright angry” and said the British public would find the “vast” sum “totally unacceptable”.

“It is an unacceptable way for this organisation to work – to suddenly present a bill like this for such a vast sum of money with so little time to pay it,” he said.

“It is an unacceptable way to treat a country which is one of the biggest contributors to the EU.”

He added: “We are not going suddenly to get out our cheque book and write a cheque for 2bn euros. It is not going to happen.”

Speaking later on a visit to Rochester and Strood, in Kent, where there will be a by-election next month, Mr Cameron made it clear the UK will not pay the full amount being demanded by the EU.

He has not ruled out making an additional contribution at some stage.

But Mr Barroso, who steps down as Commission president next month, said the bill should not “have come as a surprise”. He said the UK’s contribution had fallen in 2008 under the same mechanism.

“Of course I understand the concerns it has raised in London, but any person that wants to look at them with objectivity and honesty to the rules that were approved by the member states has to accept that sometimes these decisions happen,” he told reporters in Brussels.

Pushed as to what would happen if the UK did not pay, he said: “I cannot speculate on non-payment.

“We cannot have a negotiation about the GDP of different countries… this should be left to independent statistics authorities.”

He added that Eurostat, the EU statistics authority, which had come up with the calculation, was itself an independent body. 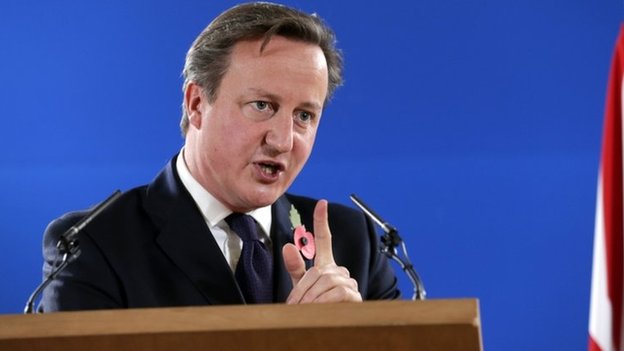 He sounded like a prime minister unleashed; by turns scornful and furious, lectern thumping, downright angry.

It seemed he was doing exactly what UKIP leader Nigel Farage demanded – refusing the European Commission any money at all.

But David Cameron was well in control.

He said he would not pay on 1 December, but did not rule out paying later.

He accepted the principle of a fluctuating EU budget that meant bills went up as well as down.

After that performance he cannot, and surely will not, pay what the Commission demands.

But by how far can he negotiate down the bill? Half of £1.7bn, a quarter, a third? All represent big money.

Were he to refuse to pay whatever the Commission finally demands, could he still persuade EU leaders in vital, future negotiations?

For a party leader battling Mr Farage, the pictures on the TV news tonight will be perfect.

If his diplomats can’t do a decent deal, they will come back to haunt him.

Mr Cameron said he wanted to examine how the EU had come up with the bill and his position was backed by several other European leaders whose countries are also being tapped for more money, claiming his Italian counterpart Matteo Renzi had described the demands as a “lethal weapon”.

He said he first heard about the EU’s demands on Thursday but acknowledged that the Treasury knew about them last week.

“You didn’t need to have a Cluedo set to know someone has been clubbed with the lead piping in the library,” he said.

There has been anger across the political spectrum in the UK at the EU’s demand for additional money, which comes just weeks before the vital Rochester and Strood by-election, where UKIP is trying to take the seat from the Conservatives.

The surcharge follows an annual review of the economic performance of EU member states since 1995, which showed Britain has done better than previously thought. Elements of the black economy – such as drugs and prostitution – have been included in the calculations for the first time.

Several Conservative MPs have said the UK should refuse to pay the sum, describing it as “illegal”.

EU diplomats told Reuters that finance ministers would meet to discuss the issue, while Downing Street is pressing for “a full political-level discussion” well before 1 December.

German Chancellor Angela Merkel said the “disparities” between what was being asked of the 28 members needed to be investigated further.

“David Cameron didn’t say he wasn’t going to pay it at all,” she said.

“He was just concerned about the very short period he has to pay it in. So I’m confident a solution can be found to this in the foreseeable future.”

Labour said Mr Cameron had failed to explain how long it had known about the EU proposals, suggesting he had delayed making it public over fears about how it would go down with voters.

Shadow chancellor Ed Balls said it was wrong that an “unfair” bill had been “sprung upon” the UK but suggested that the Treasury should have acted sooner.

UKIP likened the EU to a “thirsty vampire” and said the demand strengthened its case for British withdrawal.

UKIP leader Nigel Farage said the UK already paid £55m a day to be a member of the EU and suggested it would have no option but to pay the supplement.

“To be asked for a whole load more and be given a few days in which to pay it, is pretty outrageous and I think people will be very, very angry,” he said.

The additional payment was requested after Eurostat reviewed the economic performances of member states since 1995, and readjusted the contributions made by each state over the past four years based on their pace of growth.

The BBC’s head of statistics Anthony Reuben said prostitution, drugs and tobacco-smuggling were not included in national income before 2002 when they should have been, under accounting rules.

In contrast, prostitution was included in Germany’s own national accounts and given that EU budget contributions are based on national income, this partly explains why the UK has been underpaying and Germany overpaying, he added.