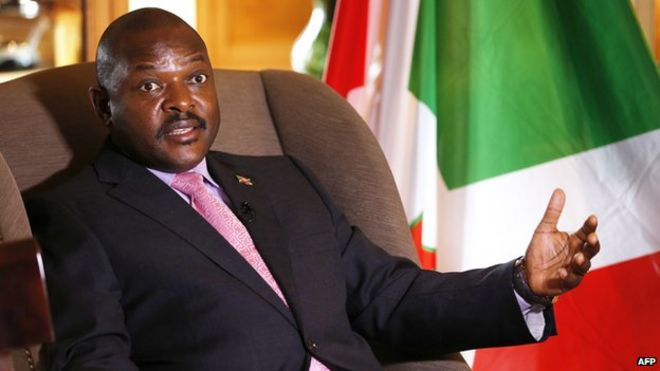 He told the BBC that such a move would plunge Burundi into a deeper crisis.

At least 18 people have been killed in protests against his bid for a third term and more than 50,000 have fled to neighbouring states.

Belgium said it was suspending nearly $6m (£3.8m) in aid to Burundi, as the EU and US warned that credible elections could not be held by June.

Burundi’s opposition and civil society groups insist that Mr Nkurunziza’s third-term bid is unconstitutional and he should step down.

But the president argues his first term does not count as he was appointed by parliament, not directly elected by the people. Last week, the constitutional court backed this interpretation.

Protests against Mr Nkurunziza continued in parts of the capital, Bujumbura, on Monday.

The protests have taken place almost daily since Mr Nkurunziza announced his re-election bid on 25 April.

“We encourage the government of Burundi to take measures to calm the situation, and the idea of a delay in the electoral timetable would be for us a good thing,” EU special envoy Koen Vervaeke said at a press conference in Bujumbura.

Belgium, Burundi’s former colonial power, said it would withhold about $2.2m it had pledged to help organise the elections.

It also said that it would pull out of a $3.5m police cooperation deal with Burundi.

Burundi’s police have repeatedly been accused of using violence to end the protests.