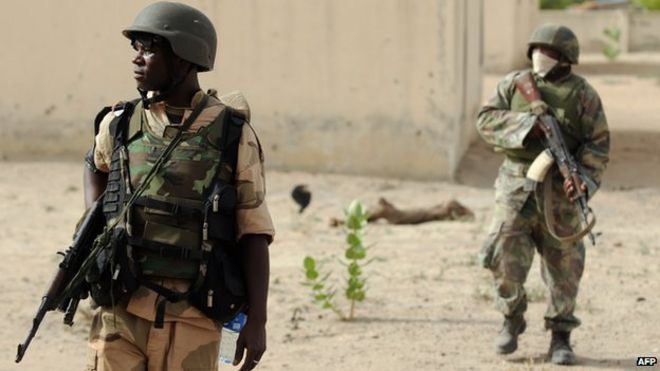 Nigeria’s military has begun moving its headquarters to the northern town of Maiduguri, it says, close to the centre of the Boko Haram Islamist insurgency.

The move would “add impetus and renewed vigour” to the fight against terrorism, a military statement said.

A military advance team began work in Maiduguri on Monday, the statement said, as part of plans to move the command and control centre from Abuja.

He announced that the military would move its headquarters to Maiduguri, in the north-eastern state of Borno, in his inaugural speech on 29 May.

The aim is to centralise operations close to the action, cut bureaucracy and speed up decision-making.

The policy and administrative arms of the military have been accused of being detached from the reality of the soldiers on the frontline.

For example, the complaints from troops about their inadequate supplies of equipment and poor welfare were often denied, downplayed or ignored by the authorities. This led to disgruntlement among soldiers, with some refusing to fight and even shooting at their own commanding officer.

However the relocation has not gone down well with some top military men, who have viewed it as merely a symbolic or even populist move, possibly driven by a desire to be distinctively different from the previous administration of former President Goodluck Jonathan.

There are also concerns it could further complicate existing operations on the ground.

The military statement said the new centre in Maiduguri would serve as “a forward command base for the chief of army staff and other service chiefs”.

The move would boost the campaign against Boko Haram – known as Operation Restore Peace – without creating “another layer of command structure”, the statement said.

A similar command structure is being established in nearby Yola, it said. Air force operations are expected to be launched from the town.

Boko Haram was founded in Maiduguri more than 10 years ago, and has carried out several attacks there.

The Islamist group has lost most of its territory in recent months, as the Nigerian military has retaken towns and villages in the north-east, backed by the forces of neighbouring Cameroon, Chad and Niger.