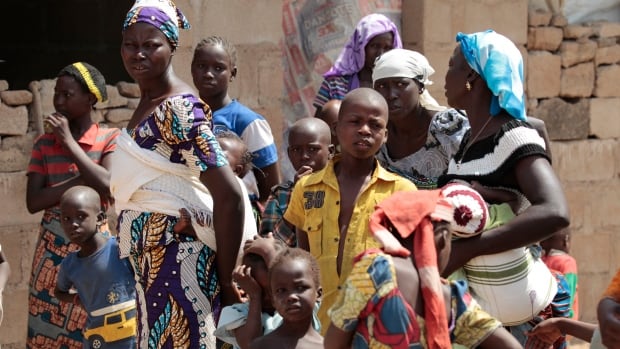 Nigerian Islamic extremists on the run from a massive, three-nation offensive took revenge Thursday on civilians in neighbouring Cameroon, shooting and burning scores to death and razing mosques and churches. France’s president warned that the world is not doing enough to end the wanton killings by Boko Haram.

Cameroonian officials said more than 500 wounded people are trapped in the town of Fotokol where fighting began Wednesday and continued Thursday. They said Boko Haram fighters are using civilians as shields. While Boko Haram had previously carried out attacks in Cameroon, the latest bloodshed comes after the group warned other nations against uniting against it and appears to be a direct result of Cameroon and Chad launching an offensive this week with aircraft and ground troops.

This new military involvement by other African nations in counterinsurgency campaigns in Nigeria stands to grow even bigger — African Union officials met here on Thursday to finalize details for a multinational force to attack Boko Haram, though deployment could be delayed by funding issues. African leaders last week authorized a 7,500-strong force to fight Boko Haram with pledges for a battalion each from Nigeria and its four neighbours, Cameroon, Chad, Niger and Benin.

“We consider Boko Haram to be a cancer, and if the international community does not focus its mind on this disease it will spread not only in Central Africa but other regions, all over the continent,” Cameroon’s Information Minister Issa Tchiroma Bakary said Thursday at the beginning of the three-day meeting in Yaounde, Cameroon’s capital. Officials from the United States, France, Russia, Britain and the European Union are attending along with senior officials from the U.N. peacekeeping department.

Earlier, Bakary told The Associated Press that some 800 Boko Haram fighters are rampaging through the Cameroonian border town of Fotokol, up in the thin northern panhandle of the West African nation. They have “burned churches, mosques and villages and slaughtered youth who resisted joining them,” he said, adding that the insurgents from Nigeria also stole livestock and food. Schools also have been razed by the insurgents whose nickname, Boko Haram, means “Western education is forbidden” in the Hausa language.

Hundreds of insurgents were killed Wednesday compared to the loss of 13 Chadian and 6 Cameroonian troops, Defence Minister Edgard Alain Mebe Ngo said. At least 91 civilians have been killed and most of the estimated 500 wounded cannot be immediately taken to the hospitals, he said. There was no way to immediately confirm the account independently. 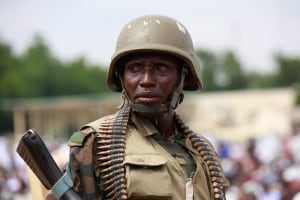 The fighters are believed to have crossed into Cameroon from nearby Gamboru, a Nigerian border town that had been an extremist stronghold since November. Gamboru was retaken earlier this week and the fighters driven out amid Chadian and Nigerian air strikes supported by Chadian ground troops.

French jets also are flying over the area to provide intelligence, French defence officials in Paris said. President Francois Hollande said France also is supporting the operations with logistics, including providing fuel and sometimes munitions. Hollande stopped short of saying whether France is participating in military action. France has a big air base at N’Djamena, the capital of Chad, which will lead the multinational force. N’Djamena lies on the eastern edge of Cameroon’s panhandle, near the conflict zone.

He also issued a stern call to other world powers: “France can’t resolve all the conflicts in the world.” Addressing the world’s largest countries, he added: “Do your work. Don’t give lessons. Take action.” France previously took the forefront in attacking al-Qaida-linked militants that controlled northern Mali, France’s former colony, in 2013 and ousting the insurgents from the main cities. Battle-hardened troops from Chad also took part in the operations against the Islamic militants.

At the Yaounde meeting, U.S. Ambassador Michael S. Hoza said the United States will help countries fighting Boko Haram. Relations between Washington and Nigeria have been strained because the United States has refused to sell Nigeria equipment like helicopter gunships. U.S. laws prohibit the sale of certain weapons to countries whose militaries are accused of gross human rights abuses, and the Nigerian military is accused of killing thousands of civilians under state of emergency powers that were declared to curb Boko Haram’s rebellion. The insurgents control vast swathes of northeastern Nigeria. Nigeria is Africa’s most populous nation and has the continent’s biggest economy as well as being its top oil producer, with most reserves being in the southwest and offshore.

International concern has grown as Boko Haram has increased the tempo and ferocity of its attacks just as Nigeria is preparing for presidential and legislative elections on Feb. 14.

Some 10,000 people were killed in Boko Haram violence last year compared to 2,000 in the first four years of Nigeria’s Islamic uprising, according to the Council on Foreign Relations.