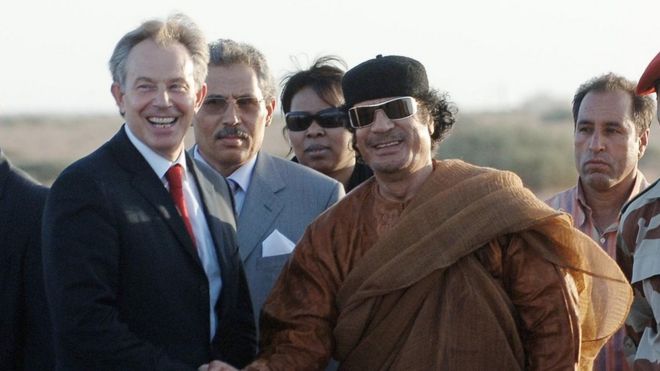 The calls were made a week after Libyan forces reacted violently to protests in Libyan cities in 2011.

In two calls, the ex-UK prime minister offered to help the dictator work with the US and EU to resolve the crisis.

But Gaddafi, who was overthrown in 2011, insisted the protests were a plot by al-Qaeda sleeper cells.

The transcripts were provided by Mr Blair’s office to the Commons foreign affairs committee after he gave evidence at its inquiry last month into UK foreign policy towards Libya.

In the calls, made on 25 February 2011, Mr Blair warned Gaddafi if he did not show he would “stand aside and go somewhere safe”, it could result in “bloodshed for a lot of Libyan people”.

He added that the situation could go “past the point [of no return]” within days.

But Gaddafi said his forces did not inflict violence on ordinary Libyan people and that the protests were an attempt by armed Islamic extremists to “control the Mediterranean… and then attack Europe”.

He likened the protests to extremist violence in Afghanistan, Algeria, Nigeria and Pakistan and said Mr Blair’s suggestions for ways forward sounded like “colonisation”.

“If you want to reap Libya, we are ready to fight. It will be like Iraq,” Gaddafi said, ending the conversation by telling Mr Blair to “leave us alone”.

Foreign affairs committee chairman Crispin Blunt said evidence submitted to the Commons inquiry so far showed Western policy-makers were “less perceptive than Gaddafi about the risks of intervention for both the Libyan people and the Western interests”.

He added the committee may consider whether Gaddafi’s warnings about extremist groups were “wrongly ignored” because of the dictator’s “otherwise delusional take on international affairs”.

Mr Blair met Gaddafi on several occasions while prime minister, including at his desert base in Libya in 2004 and 2007.