It is generally believed that black people do not possess blue eyes. The blue eyes has always been associated with the Caucasians (whites). In many scientific studies and a more recent one conducted by the Copenhagen University the genetic mystery of “blue eyes” is said to have originated from the northeast coast of the Black Sea. 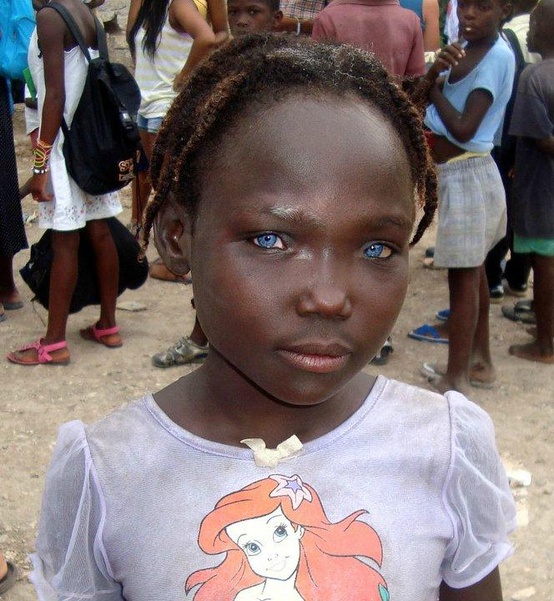 So why are some few black people have “blue eyes’ nowadays?  The answer according to scientists could only be attributed to genetic mutation or Waardenburg syndrome (WS),which is a rare (1/40,000) disease characterized by sensorineural deafness in association with pigmentary anomalies and defects of neural-crest-derived tissues.

However,it is also a historical truth the Africans colonized Europe over 10,000 years ago and they were inf fact the first homo sapiens to cross Europe to Asia and south pacific. Could it also be that some blacks with blue eyes may have gotten blue eyes from  their ancient  African ancestors and whites that inter-bred during Africa`s colonization of Europe? This question has become more relevant as some few children born of both African/100% black parents possesses “blue eyes.” 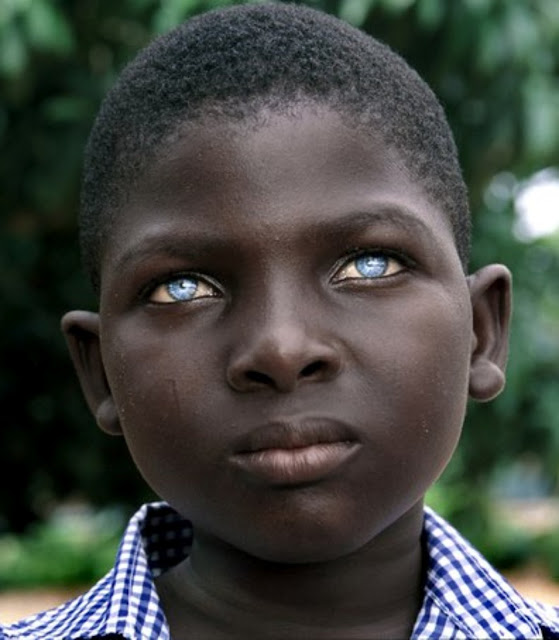 African boy with blue eyes.This photo is, perhaps, the best example of a black African, non-mulatto, non-albino, with blue eyes. Also, the boy in the picture does not appear to have Waardenberg Syndrome, also a source of blue eyes in blacks. This leaves the strong possibility of a rare mutation of a key eye color gene. 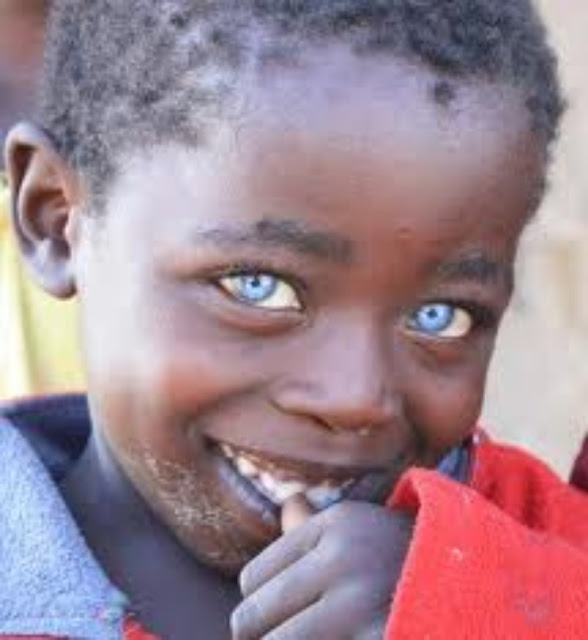 Zimbabwean boy with blue eyes.The photographer, Vanessa Bristow, called it The Boy with the Sapphire Eyes. 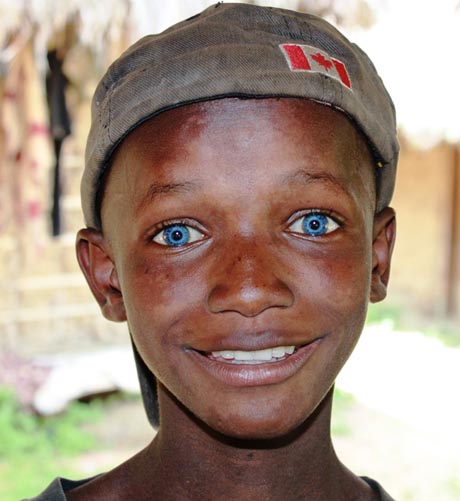 Blue eyes as a Result of Wardenberg Syndrome

There are four types of Waardenburg Syndrome, with a mix of possible characteristics as the determinant. Medical challenges increase with type. The boy in the picture is displaying two major symptoms of type 1, as does the previous boy (perhaps) (); bright blue eyes and dystopia canthorum, a condition where the inner corners of the eyes are set more widely apart, but with normally distanced eyes. 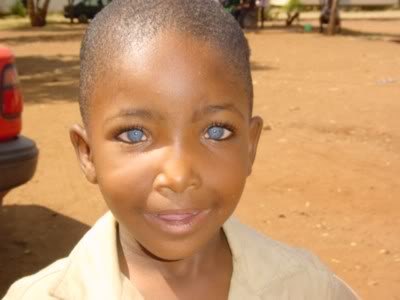 Waardenburg occurs once in every 42,000 births, and is a deficiency inherited from a single parent, who may or may not display similar characteristics. Regarding the eye, color abnormalities come in three forms; heterochromia (multiple colors), bilateral isohypochromia (pale blue eyes), or fundus (reflective) pigmentary alterations (spottiness). 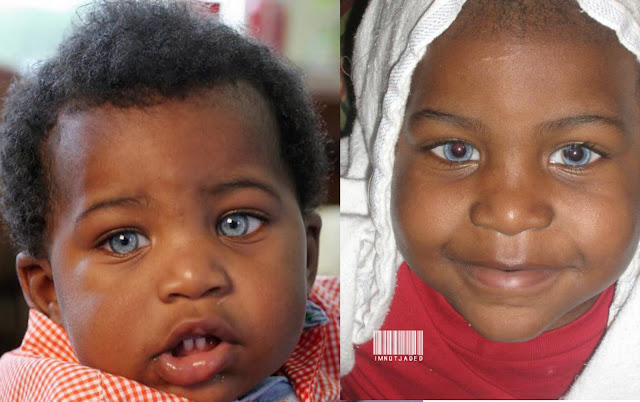 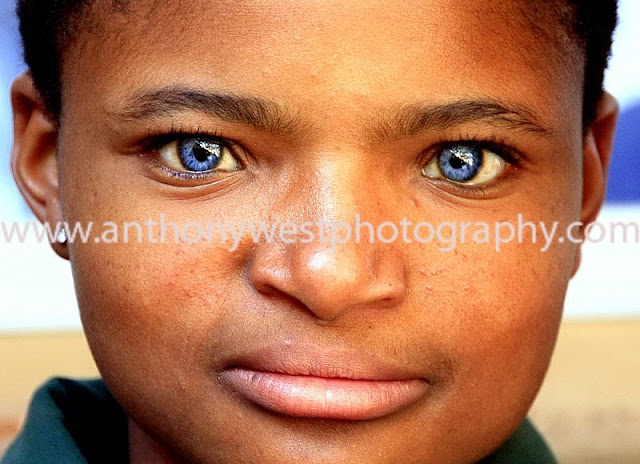 Below is a story on the origins of blue eyes :

All blue-eyed people can be traced back to one ancestor who lived 10,000 years ago near the Black Sea 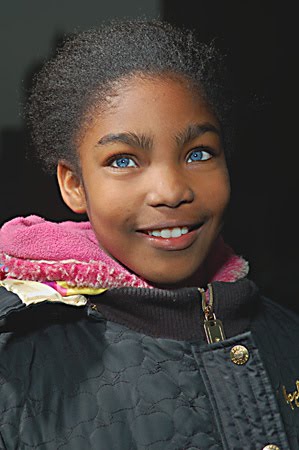 Everyone with blue eyes can be traced back 10,000 years to the Black Sea region
Throughout history they have been the eyes that are prized.
Frank Sinatra’s were legendary, Paul Newman’s melted a million hearts while Cameron Diaz’s dazzle in modern Hollywood. But how – and why – blue eyes arose has always been something of a genetic mystery. Until now.
According to a team of researchers from Copenhagen University, a single mutation which arose as recently as 6-10,000 years ago was responsible for all the blue-eyed people alive on Earth today.
The team, whose research is published in the journal Human Genetics, identified a single mutation in a gene called OCA2, which arose by chance somewhere around the northwest coasts of the Black Sea in one single individual, about 8,000 years ago. 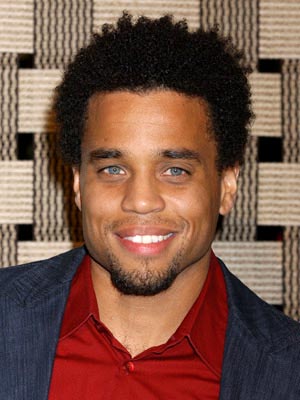 Actor Michael Ealy has sky blue eyes.
The gene does not “make” blue in the iris; rather, it turns off the mechanism which produces brown melanin pigment. “Originally, we all had brown eyes,” says Dr Hans Eiberg, who led the team.
And most people still do. The finding that a rare mutation, probably dispersed in the rapid wave of colonisation that followed the end of the last ice age, highlights one of the great mysteries of human evolution: the oddness of Europeans.
Those from Europe and the Near-East have many characteristics that set them apart from the rest of the human race.
Not only are Europeans far more likely to have blue eyes (95 per cent in some Scandinavian countries), they also have a far greater range of skin tones and hair colour than any other ethnic grouping.

It is only in Europe that you will find large numbers of blondes and redheads, brunettes, pale skins and olive skins, blueeyed and green-eyed people living together in the same communities. Across the rest of the world people are almost uniformly darkhaired and dark-eyed.
Why this should be remains unknown, and in particular how such mutations can have arisen so quickly since Europe was colonised by Africans just a few tens of thousands of years ago.
One theory is that Europe’s cold weather and dark skies played a part. Fair skin is better at making Vitamin D from the 8 per cent of the world’s population have blue eyes weak sunlight found in northern latitudes.
Another suggestion is that the strange skin, eye and hair colours seen in Europe are down to ancient interbreeding with the Neanderthals, who died out about 25,000 years ago.
Maybe the Neanderthals were blonde or red-haired and it is their genes which we have inherited. The trouble with this theory is that there is no evidence, from the scraps of Neanderthal DNA that have been recovered from bones, that there was any substantial interbreeding between them and Homo sapiens at all.
Perhaps the most plausible theory is that blonde hair and blue eyes arose because of a mechanism called sex selection.

This is where males and females choose as their mates those who have one unusual physical characteristic, not necessarily associated with “fitness” per se but simply something unusual.
The gigantic (and otherwise useless) tail of the peacock is the best example. Sex selection comes to the fore when there is a lot of competition for mates of one sex or the other. The theory is that in Europe, where men had to spend weeks at a time out on the hunt, males were in very short supply.
In such societies, women who had flaxen locks stood a better chance of standing out and attracting the attention of the few men that would have been available for mating.
Even back then, the blue-eyed blonde was not only in demand, but also definitely would have had more fun. 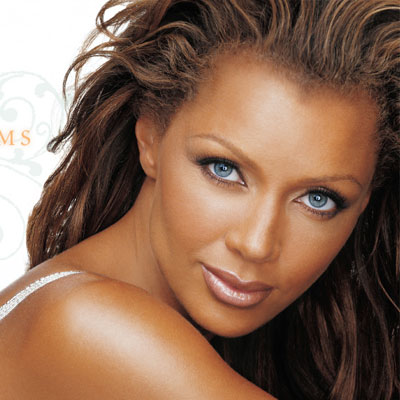 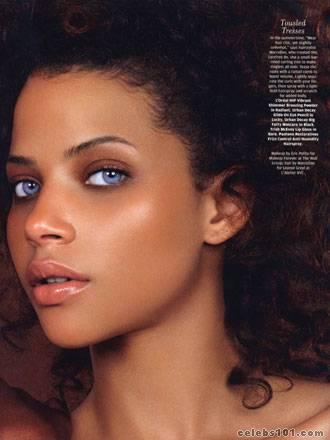 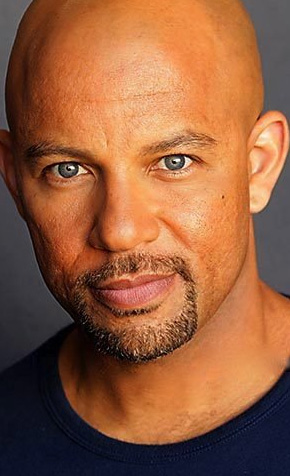