The speaker of Brazil’s lower house of Congress has opened impeachment proceedings against President Dilma Rousseff.

The process is based on allegations Ms Rousseff broke the law in managing last year’s budget, Eduardo Cunha said.

Despite re-election last year, her popularity has slumped amid a corruption scandal involving the state-owned oil giant, Petrobras.

“I was outraged by the decision,” said Ms Rousseff in a televised speech.

“I haven’t committed any wrongful act,” she added.

Ms Rousseff, who earlier called an emergency cabinet meeting, said she was confident that the impeachment motion would be rejected.

Two-thirds of the lower house must approve the process for it to proceed.

The governing coalition has a majority in the lower house of Congress.

The defeated opposition candidate in last year’s presidential election, Senator Aecio Neves, has tweeted that he supports the impeachment request.

“Everyone in the country must obey the law, especially the president,” he wrote.

Mr Cunha is himself facing corruption allegations, which he denies.

He has been accused of lying about a secret bank account in Switzerland. 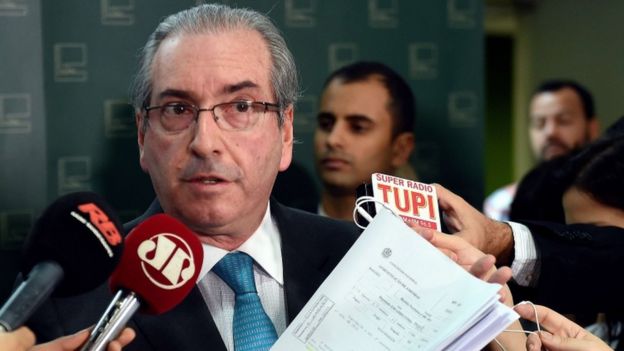 An ethics committee is voting on whether to authorise action to eject him from his post of speaker.

Mr Cunha had been threatening to open impeachment proceedings if the governing party did not offer him backing, says the BBC’s Julia Carneiro in Rio de Janeiro.

His decision was “purely technical”, he said.

“It was a difficult decision. I did not become speaker of the Chamber of Deputies aiming to approve impeachment proceedings against the president,” said Mr Cunha.

The impeachment request had been filed by a distinguished jurist, Helio Bicudo, and some opposition members.

The document blames the government for the corruption scandal at Petrobras and says Ms Rousseff violated Brazil’s fiscal responsibility laws.

In October an audit court ruled that Ms Rousseff had borrowed money illegally from state banks to make up for budget shortfalls. 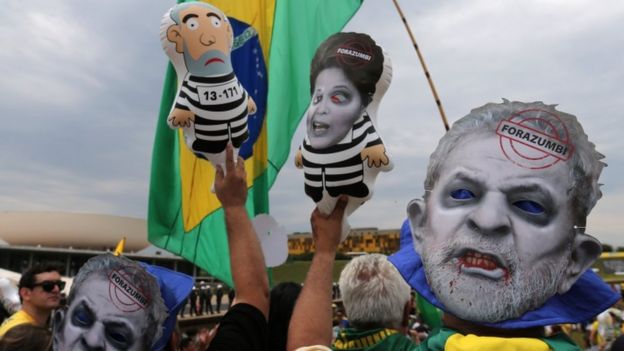 On Tuesday, the economy minister announced that Brazil’s economy shrank by 1.7% in the third quarter of the year compared with the second quarter, deepening the country’s worst recession in 25 years.

Compared with a year ago, the economy is 4.5% smaller.

The corruption scandal at Petrobras was partly to blame for the downturn, said Economy Minister Joaquim Levy.

It led to drop in foreign investment over the past year, he said.