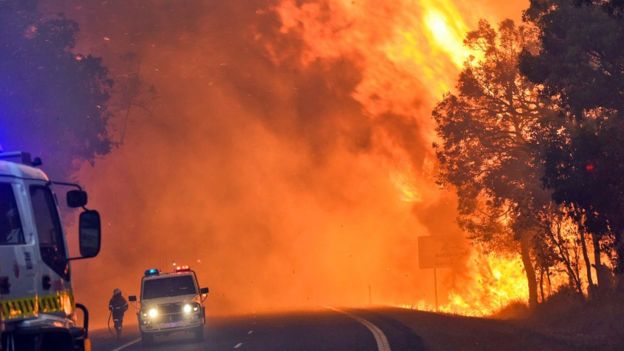 A massive bushfire that devastated a small town is still burning out of control in Western Australia.

About 95 houses in Yarloop, south of Perth, have been destroyed and three people are reported to be missing.

Wind gusts of up to 60km/h (37mph) overnight fanned the blaze, dubbed the Waroona fire, to heights of 50m.

The fire area is now 58,000 hectares and emergency warnings remain in place for Waroona, Harvey and surrounding areas including Preston Beach.

A local politician told the BBC the fire “could well be the end” of Yarloop.

Western Australia Fire Commissioner Wayne Gregson told a news conference that the fire in Yarloop was too intense to be tackled head-on.

He said four firefighters were injured battling the blaze and one fire truck was destroyed.

‘Could be the end’

A large thunderstorm hit the town of Pinjarra to the north of the fire zone at about 10:00 local time (02:00 GMT).

Reports said lightning struck an evacuation centre in the town, injuring a man in his 50s and cutting power.

The storm was understood to be heading towards the fire zone – a downpour of rain could ease conditions, but lightning strikes could also spark further fires.

Local politician Murray Cowper told the BBC that the loss of property was “significant”.

He said firefighters told him the town’s pub, bowling club and historic timber workshops had been destroyed.

“You’ve got seasoned firefighters who’ve been around for many years saying they’ve never seen anything like it,” Mr Cowper said.

“A big fireball came through and there was no way they were going to stop it.

“This could well be the end of the town.”

Yarloop resident Alex Govanovich told the Australian Broadcasting Corporation the fire was “crazy – one fireball after another” with “devastating” winds.

A Bureau of Meteorology (BoM) spokesman said conditions were “very tricky”, with wind gusts of up to 60km/h expected again on Friday.

Thunderstorms and sea breezes could add further unpredictability to the situation if they rapidly pushed the fire in new directions.

Thunderstorm systems could also be generated within the fire itself, the spokesman said.