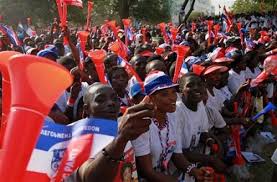 The Kwame Nkrumah University of Science and Technology branch of the Tertiary Students Confederacy (TESCON) say they won’t forgive the leadership of the New Patriotic Party (NPP) if they fail to win power in 2016.

Emmanuel Nana Boakye, President of the Youth wing of TESCON-KNUST said this in an interview with Citi News after a conference with the party’s General Secretary, Kwabena Agyepong.

He warned that, “we are not going to forgive our leaders at the helm of affairs now; be it regional, be it national, be it constituency, if power eludes us in 2016. They should also bear in mind that it’s not only the youth wing of this party that won’t forgive them but Ghanaians in general.”

“All suffering Ghanaians will never forgive them as such,” he emphasized.

Meanwhile, the General Secretary of the Party, Kwabena Agyepong at the conference encouraged the students to rally behind the party and urged them to volunteer and help the party wrestle power from the governing National Democratic Congress in 2016.

“All the country is looking up to the NPP to save us from our troubles and I want to assure you that as leaders of our party, we will work very hard with you the youth. We want to assure you that come 2016, our presidential candidate, Nana Addo Dunkwa Akufo-Addo, will be elected as the next president of the Republic of Ghana,” Kwabena Agyepong said.

While assuring them of power in 2016, he also urged the youth to also play their roles effectively to bring the party’s dream to reality.

“What is absolutely viable for victory 2016 is to revive that spirit of volunteerism and the three ethics – fairness, selflessness and sacrifice. Once we can imbibe ourselves with these values, I’m very confident you will play a major role in redeeming power for the NPP.”