7 REASONS WHY YOU SHOULDN’T MIND BEING SINGLE

A fairytale romance? The knight in shining armour who will sway you off your feet and you’ll live happily ever after? Choose your own beautiful story among those we’ve grown up with, believing that we simply must end up in a happy couple, and the earlier this happens, the better. The world is changing, however, and this rule has been seriously shaken for many. It’s not just that people put off serious long-term commitments for later in their life, it’s just that some people simply opt out of such commitment. This latter phenomenon, whatever some say (such as money is more important than relationships), is not the healthiest one though. But enjoying single life util the right person shows up in your life is perfectly fine, and here’s why.

There are people who were deeply traumatised in their childhood, ignored and unloved, and some of these people can only experience self-acceptance and self-love through another person. Such is life for many, alas. Then there are other people, who were loved and who grew up in a warm and cozy family environment, and who don’t feel the need for a commitment at this point in their lives. There is nothing wrong with not wanting to have a stable relationship, and that’s something that needs reminding, because somehow we’re still hanging on to obsolete attitudes, such as becoming part of a couple straight out of university.

The world is full of places and experiences waiting for you. For obvious reasons that we’ll come to later, you have much better chances of taking part in these experiences, if you’re on your own. Just because you don’t have a significant other doesn’t mean that you don’t have friends, right? When you’re single, you can make all your own choices without having to take into account someone else’s feelings and preferences. This is a liberating feeling, best appreciated by those who have already been in a demanding but unsatisfying relationship. 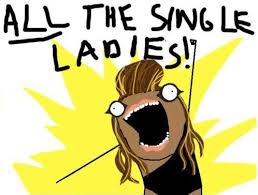 A consequence of the above, being single is often more fun than being in a committed relationship. Romance has its many and undoubted virtues but imagine one day just wanting to go out with the girls and your boo making a face, because you’re choosing girl time over family time. Okay, not all men are so selfish but it is a possibility. You might even feel uncomfortable to follow your social urges when you’re in a stable relationship, even if your partner is open and understanding. We people are strange beings sometimes.

4. It’s what being independent is all about

It is a sad fact that many people are pushed into unhappy relationships by fear of being alone or by family pressure. Sometimes it gets too much to hear for the ten thousandth time how great it is to have a regular and frequent sex life, then cuddle together, cook together, shower together, etc.; and you give in and decide to try, even if you’re not too sure it’s your time. As a rule, you get disappointed. The smarter choice is to stick to your standards and not compromise them just to “try the coupling thing”. Don’t be anxious, the right one for you will come along when the time is right and when you are ready for commitment.

It’s not a nice thing to have to admit but many people settle down with partners who are not their perfect match but they’re too afraid to die alone, so they compromise. The hard facts of life are that we are born alone (bar twins, of course) and we die alone. That’s not something to be depressed about, because in the meantime we meet people, make friends and lovers and generally have good times and bad times. So, fear of spending your life alone is a bad adviser, when it comes to relationship status, the reason being this fear is irrational and irrationality affects reason.

There is definitely a hint of discrimination against single people, with regard to accommodation, for example. Many landlords prefer families to singles, and that stems from a wrong picture of single people. They are often considered short of wholesome, because of their family status. Many believe that there’s a dark story behind the single label, a childhood trauma or a relationship gone wrong, but as we saw this is most definitely not always the case. One way of enjoying being single is by demonstrating to the skeptics every chance you get that being single in your case is a question of choice, not of necessity or fear.

7. You can be selfish without any guilt

Why should there be something wrong with focusing on your own needs, wants, and dreams, without having to factor in someone else’s? That sums up the best things about being single. You have the time all to yourself, you can focus on professional or personal development, you can travel the world on your rules, and pretty literally you can do whatever you like. It’s for all these reasons that many happily coupled people sigh wistfully for the times when they were single.

How to improve sex life after having kids

3 steps to breaking up with someone

What to Look For in a Guy: 20 Things That Matter Beyond Looks

What It Feels Like to Experience Anxiety in a Relationship

How to Comfort a Girl: 15 Thoughtful Ways to Do It Right

What Does It Mean When a Guy Calls You Cute? These 20 Things!