In October, Anas Aremeyaw Anas, known for his undercover investigative works, released a video in which 32 High Court judges and circuit court magistrates were seen or heard negotiating bribes in order to change the course of justice.

Twenty-one of the 32 judges involved in the corruption exposé have been sacked by the country’s Chief Justice.

After 57 years, Ghana has for the first time ever, made an appearance in the highly-prestigious Grammy Awards. Rocky Dawuni was nominated in the ‘Reggae Album of the Year’ category with the highly acclaimed album, ‘Branches of The Same Tree’ under Cumbancha Label for the 2016 Grammy awards.

Nadia Eke won bronze for Ghana at the All Africa games in Morocco and broke the national triple jump record. Actress Yvonne Nelson embarked on the #dumsormuststop campaign on May 16. Her reasons were:

This is for the sick people at the hospitals who have to endure dumsor on their sick beds. This is for the many patients who are unable to receive efficient healthcare because of dumsor. This is for you and I and the unborn generation of this great nation.”

Stonebwoy beat Sarkodie to win the 2015 BET Best International Act – Africa category making it two times in a roll that a Ghanaian has scooped up the award, as Sarkodie won it in 2014.

Sarkodie headlined his “history in the making” concert in New York at the legendary Apollo Theater. The event was so big, it was featured in the New York Times, the biggest media house in USA.

Renowned artistes who have performed at the Apollo Theatre include Michael Jackson among others. Click here for the article on The New York Times.

Abraham Attah, a first-timer in acting from Ghana, starred in a Netflix movie, Beasts Of No Nation, alongside Edris Elba, Ama K. Abebrese among others and it has since changed his life for good.

He went on to win the Marcello Mastroianni Best Young Actor Award at the Venice Film Festival.

Reggie and Bollie won the hearts of many with their energetic performances at The X Factor UK. The Ghanaian duo beat the odds by making it to the finals and secured the #2 spot in the competition.

The 17 year old US resident was accepted to all eight Ivy League schools in the US. He decided to attend Yale University.

Andre Ayew was rated as the best contributor to goals at the 2015 Africa Cup of Nations in Equatorial Guinea by a leading football statistics agency after winning the highest scorer award. 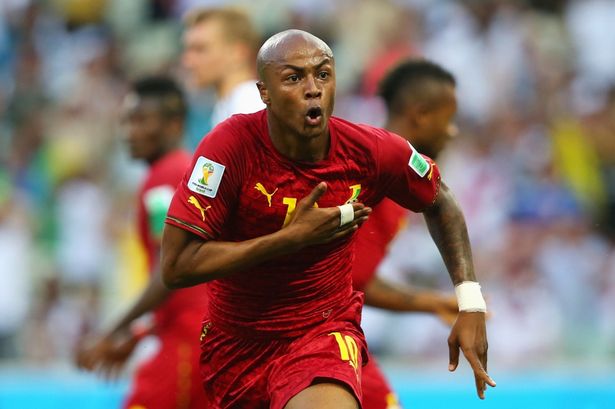 Celebs At “Happily Never After” Premiere